I can officially (officially) announce that it's Halloween and it's time to eat pumpkin. Which would be a good thing to announce except that I'm kind of a pumpkin and fall foods freak and started on September 2nd. I will eat my way through pumpkin, apples, squash, zucchini and everything fall for breakfast, lunch and dinner. 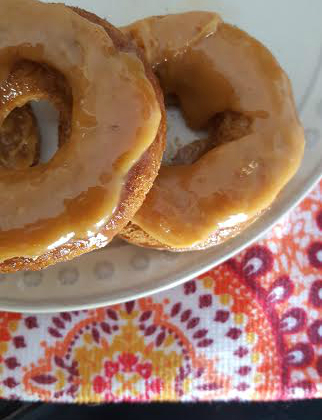 I kind of feel like the The Very Hungry Caterpillar story once the day after the day after Thanksgiving hits except I don't get the option to go into a sleep coma after devouring fall foods for months on end and turning into a butterfly. If shedding pounds were THAT easy we'd all sign up for that diet plan. I like the theory behind it though, it's got a wonderful concept to it and one that scientists everywhere should look into.

Today though, since none of us gets to do that, it's time to enjoy some healthier and lighter Halloween desserts. I'm featuring the fabulous Nicole from Crazed Mom. I'm highlighting her today as a member of the Secret Recipe Club. Each month we get to highlight a member and share one of their favorite recipes with our readers.

Nicole has some fun healthier fall dessert recipes. Some of my favorites I found were:

For the Donut Glaze: