There is a really simple and easy way of carbohydrate counting when you eat out at a restaurant.

1. Eat at the same restaurants. No exceptions.

3. Since you'll be eating the same entrees over and over and over and guessing on how many carbohydrates the meal has you will get the carb counting down and can soon order at your favorite restaurants with ease. Unless of course, you have decided that you can not look at that entree ever again. 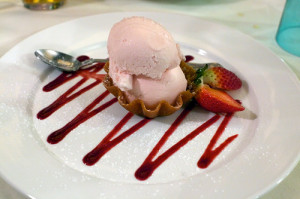 There are so many times that isn't possible to do. For instance, when your company flies you in on a red eye and that flight you were supposed to get dinner on gave you a bag of peanuts and biscoff cookies  instead and you are now asking the taxi driver to take you to any restaurant that's open. Or you end up opting for midnight room service and getting anything that they currently have available to deliver in twenty minutes or less.

The one thing that carbohydrate counting, pen injections and insulin pumps give you are the freedom to...have freedom. It's nice to be able to go out and just eat with friends at a restaurant or go out for an anniversary dinner with your spouse. But diabetes likes to let you know it's there and that anniversary dinner can wreak havoc on you later that night with cotton mouth and multiple trips to the bathroom until you are able to get your blood sugars back into a normal range.

There are some tried and true remedies for making restaurant eating out a little bit easier for you. And as always feel free to add your tips and tricks to eating out.

1. Nail Your Portions Before You Head Out the Door: Ever wonder how that two inch by two inch by two inch brownie you consume over time becomes three inches, or even four but you still count the carbohydrates the same? Sometimes refresher courses are good to have. Book a refresher session with your dietician, or spend a week getting reaquainted with weighing, and measuring cups and spoons. Knowing everything from sauce portions to rice amounts will help when you head out to the restaurant next time.

2. Carbs, Schmarbs: Sometimes it's a little easier to order low carbohydrate meals knowing you won't have to try to count for pasta, rice or breads. While there is a place for carbohydrates and they are important for our bodies, opting for a lower carbohydrate meal on occasion when eating out isn't necessarily a bad thing. Ordering a lean cut of meat and some steamed vegetables could be a better option for those who struggle with high or low blood sugars after eating out.

3. Grab Your Guide: There are several great tools on the market available if you are eating out at a chain restaurant. They generally have most of their meals listed and have carbohydrate counts for them. Try CalorieKing.com which has valuable resources listed on the web, and books y0u can order and have delivered to your home or download to your Kindle.

There are also several great internet resources and blogs that talk about the joys of trying to count carbohydrates and eat out:

Eating Out With Diabetes by Stacey Hughes

Time Travel by Kerri of Six Until Me