My littlest celebrated her FIRST friend's party and it was a blast! We had a great time hosting this girl's tea party birthday celebration! And the best part is it cost me under $50 to host! A very simple and easy DIY cheap girls tea party birthday that turns out fabulous! 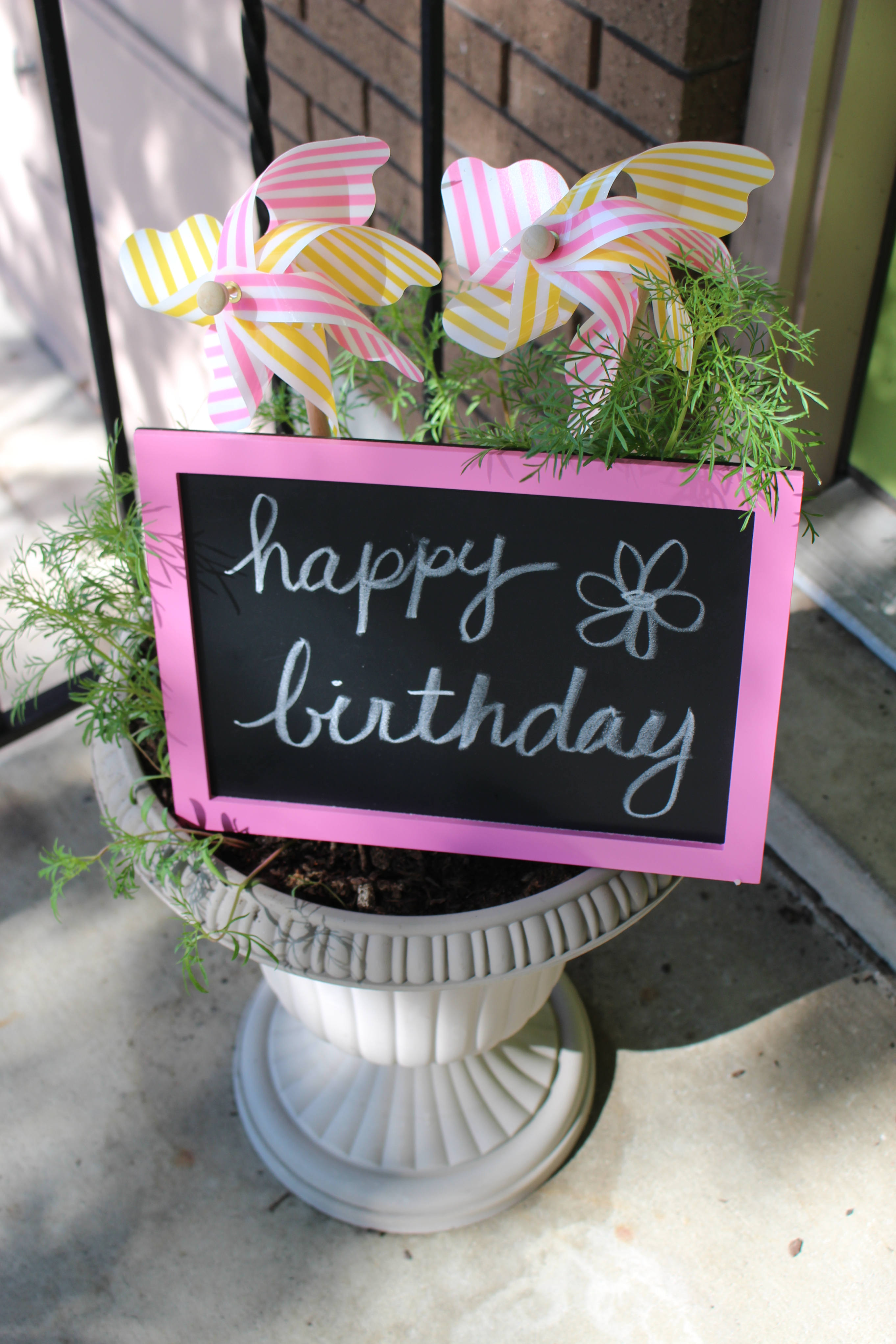 My little one is turning seven and it's crazy to think that she is that old. She was a BABY just yesterday! It's fun to go back and see her photos growing up. She's had some fun birthdays but this one was special because it was her first friend's birthday party. She was excited and her birthday was completely crazy by the time I asked for ideas so we had to tone it down (a lot) and focus on what we could do with a  small budget.

Seven is a fun number. She has been so much fun this past year. First graders are so cute and learn so much in a year. They are also fiercely grown up and independent and she is no exception. She loves crafting, dogs and riding her bike.

I went with this look for tea party invitations. They were free from Greetings Island. I attached some sparkly cardstock to the back of the invitation and then used a few paper flowers on the front around the tea kettle and cups to make the invitations as my seven year old puts it "pop." (She watches a lot of YouTube crafting shows).

It's a tea party! Our decorations came from Target One Spot and Walmart. The cute glass jar was only $4.97 at Walmart! I am a minimalist on decorations. I have gone to some incredible parties with gorgeous decorations but for me, I put the focus and the larger part of my budget into the party.

When we started I found two themes: one was a more Alice in Wonderland Tea Party look and the other was a more summer time tea party look. This theme from Target was more inexpensive to do but looked nice so i went with it. 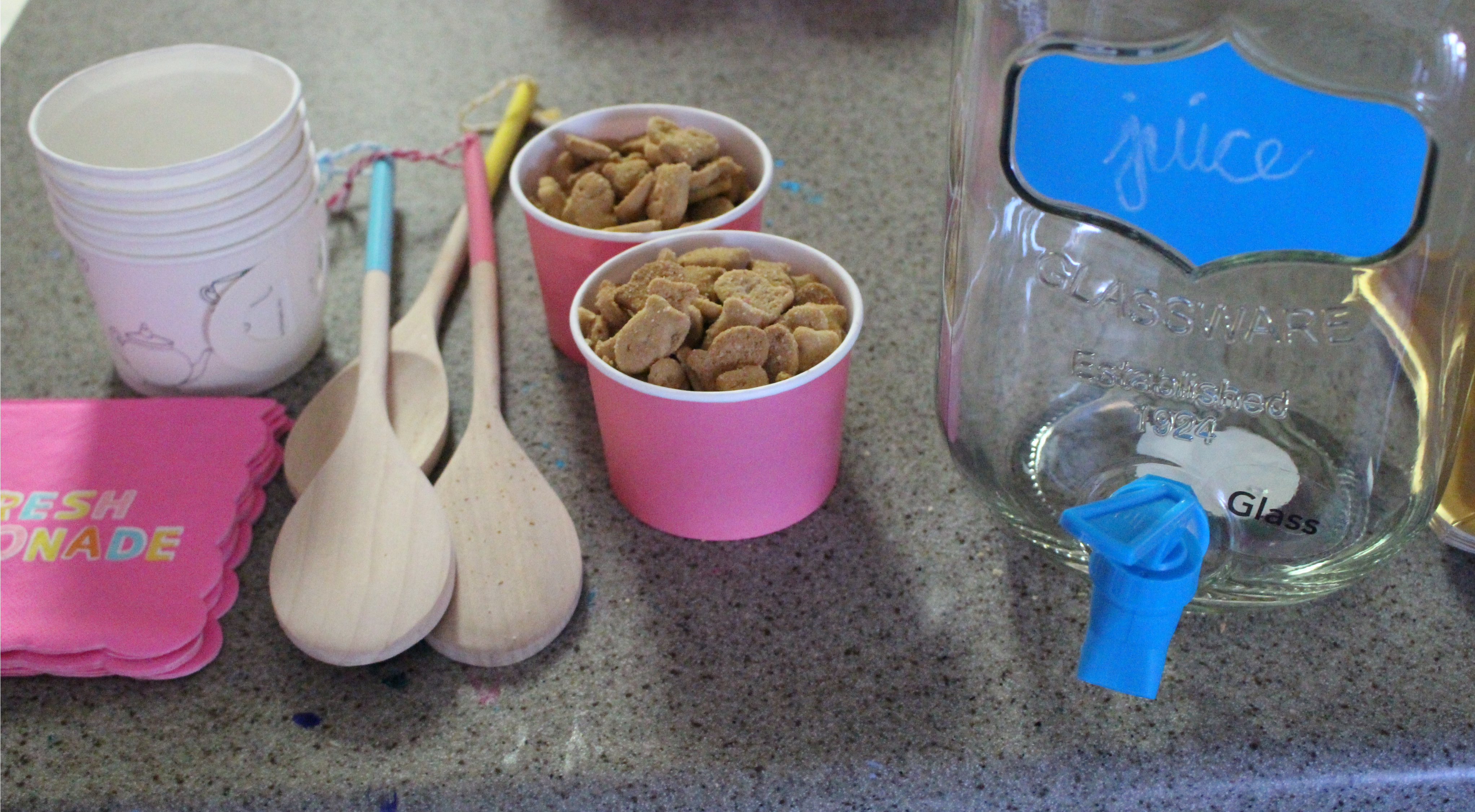 Most of you who know me know that my FAVORITE part of Christmas or birthday's are the favor bags and stockings. I love finding unique trinkets. The party favors were a lot of fun for the girls and I found a lot of things on sale. I put all the favors in the cup and then put the cup in the paper bag and had the pinwheel sticking out from the top. Very cute and inexpensive! 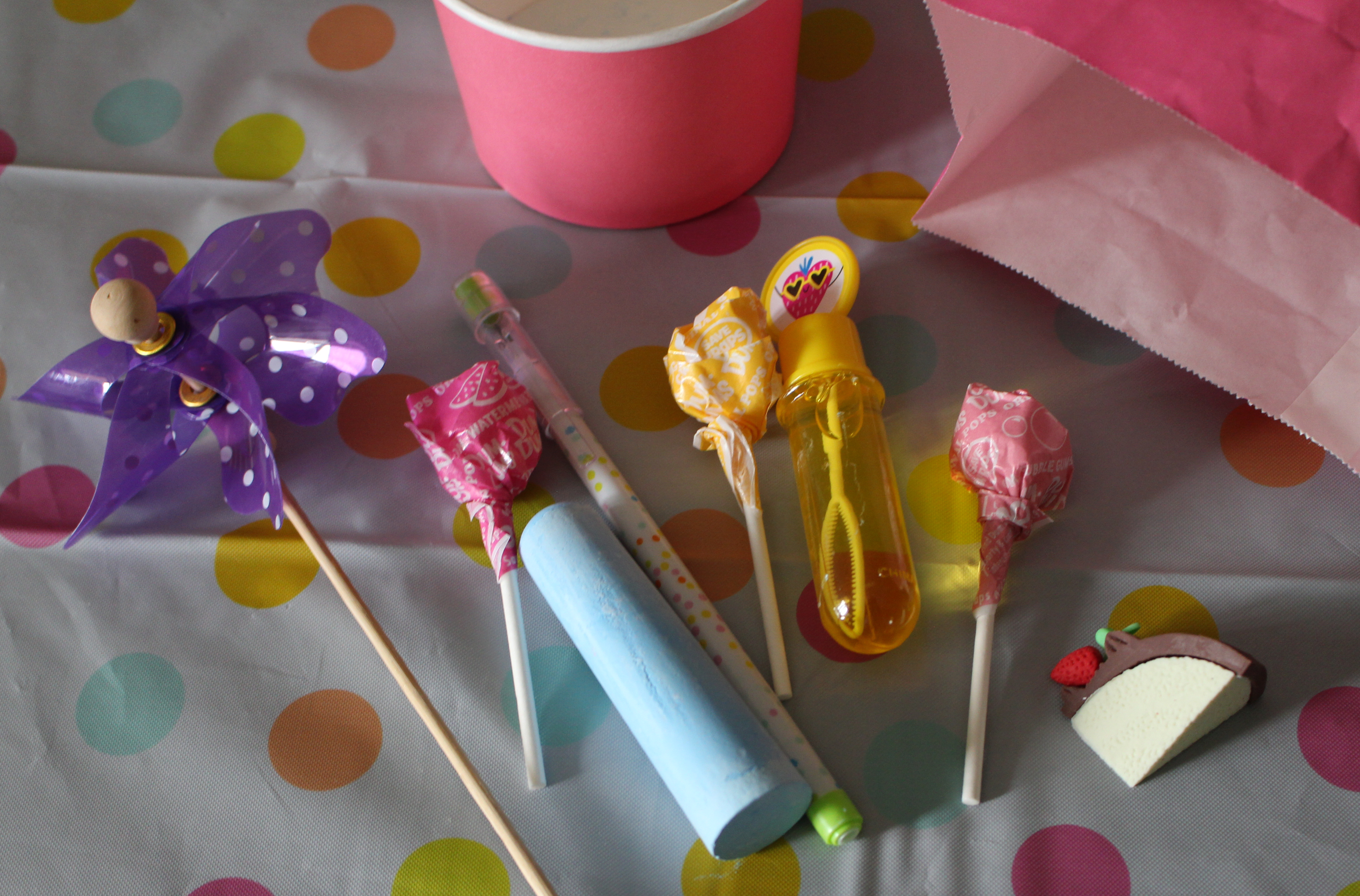 The party was from 11-1 so we served a light lunch with mini pancakes made from scratch and fruit that was on sale. We also had pink fruit juice with strawberries inside to be "fancy." I seriously need to watch what she watches on YouTube more. How she thought of strawberries in her juice as being fancy... 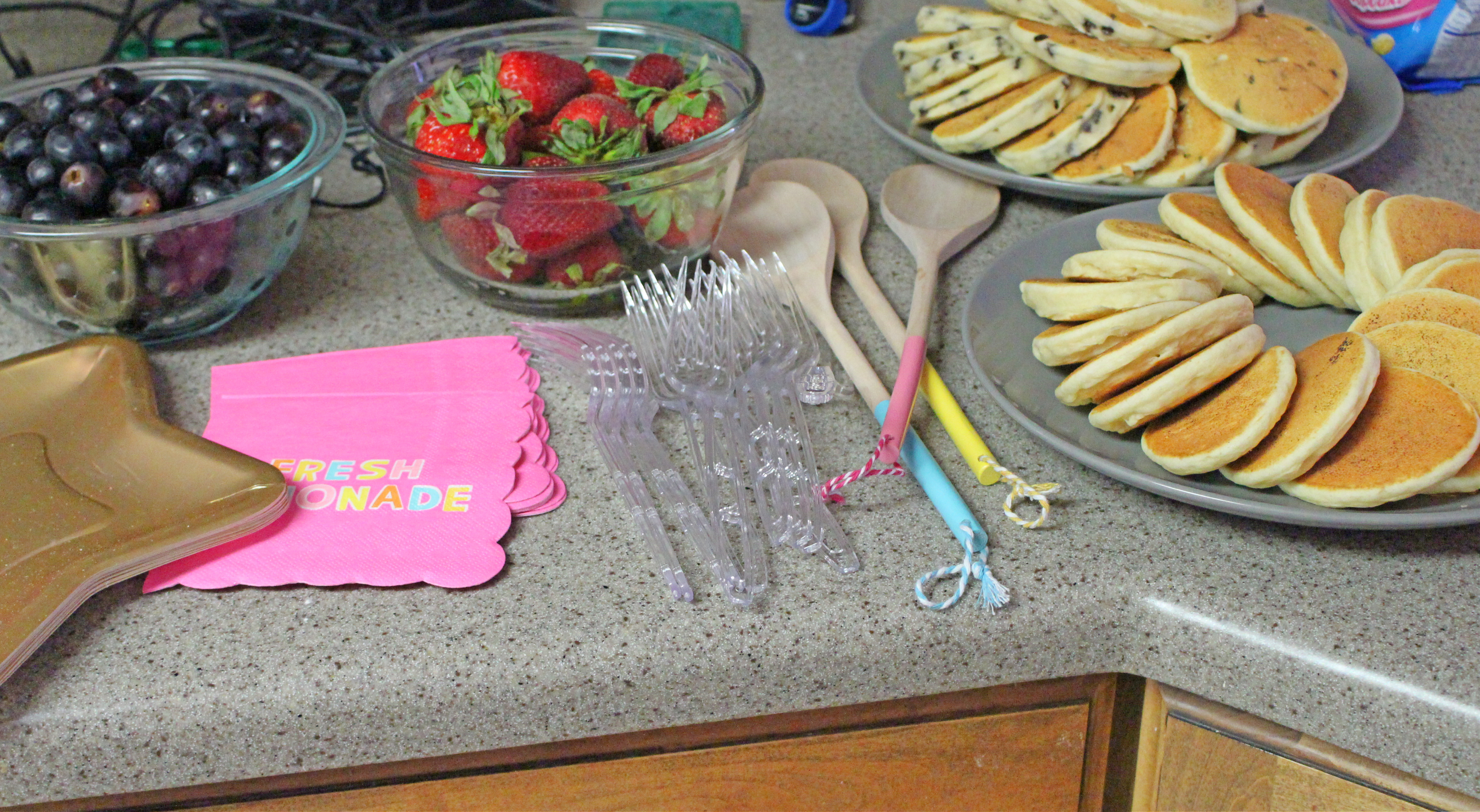 The girls also had cupcakes which I was REALLY sad didn't turn out as well as i wanted. I was just in a hurry to get everything finished before the girls came and was running out of time. And of course AFTER her party I found these cute cupcake toppers and now I wish I had ordered them. 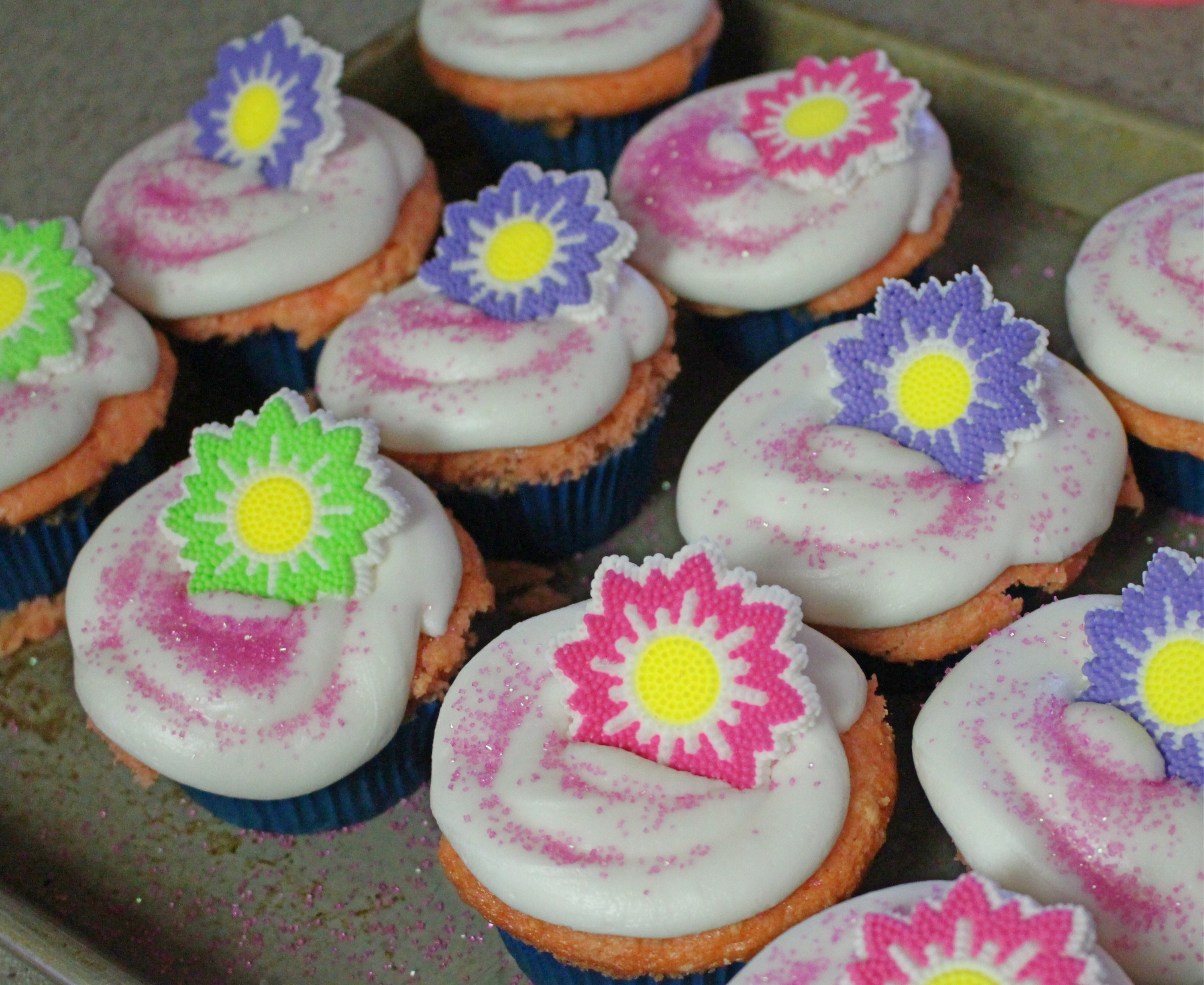 We saw this idea but I forgot to buy sugar cubes at the store! Have the girls build and create fun sculptures and houses with sugar cubes, then include some mini figurines for the girls to play and do some imaginary play with! 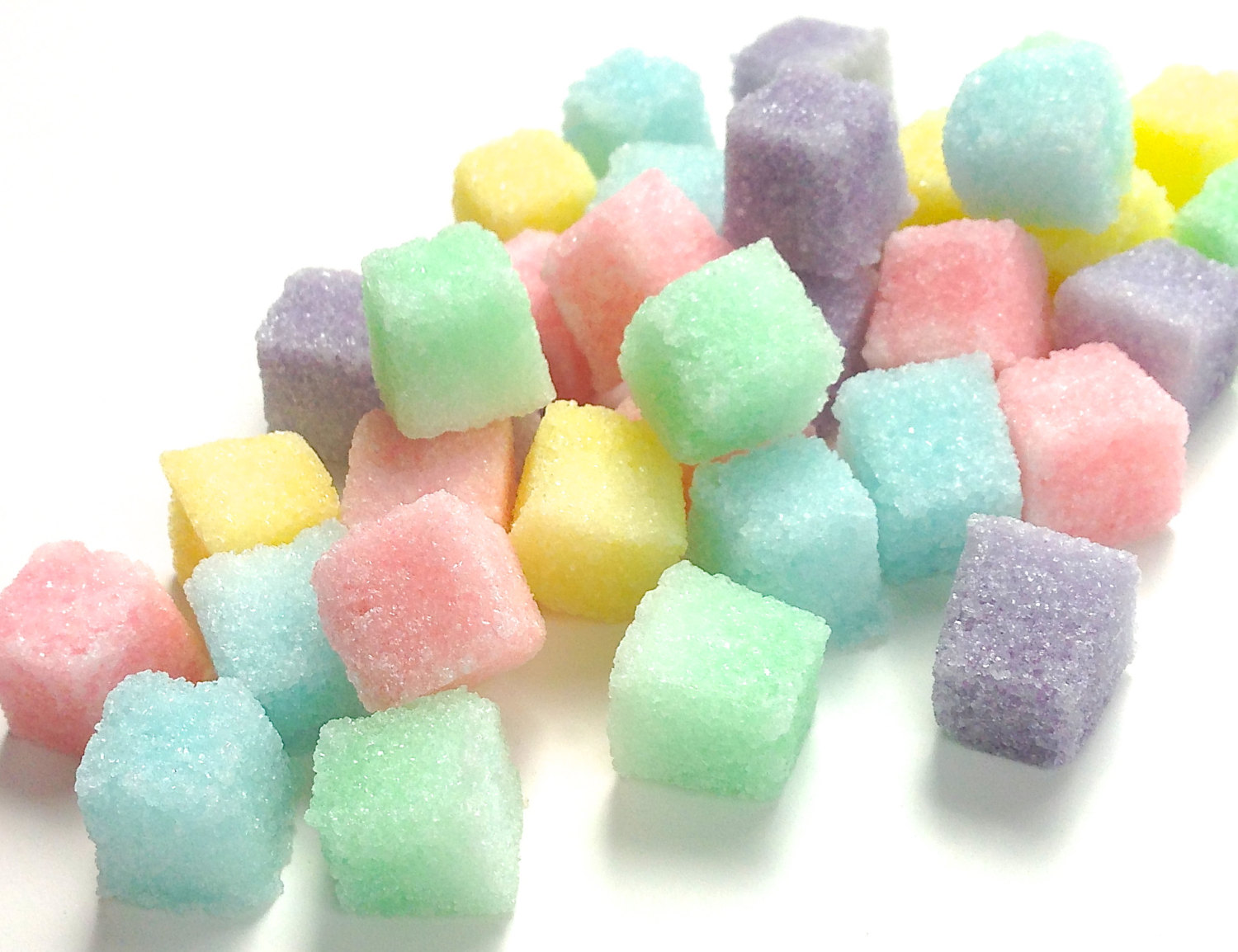 A fun activity for kindergarten and up would be to host a Pinkalicious bingo activity! 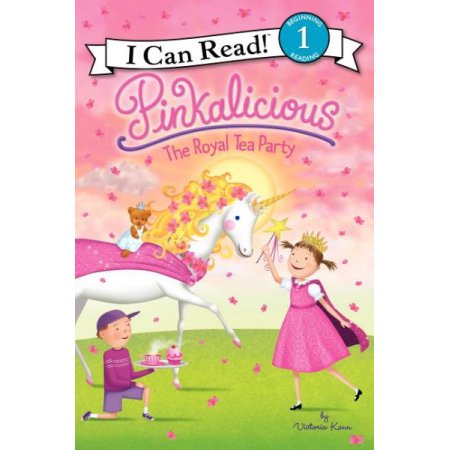 Then print out these Pinkalicious Bingo Cards from Kid Scraps. 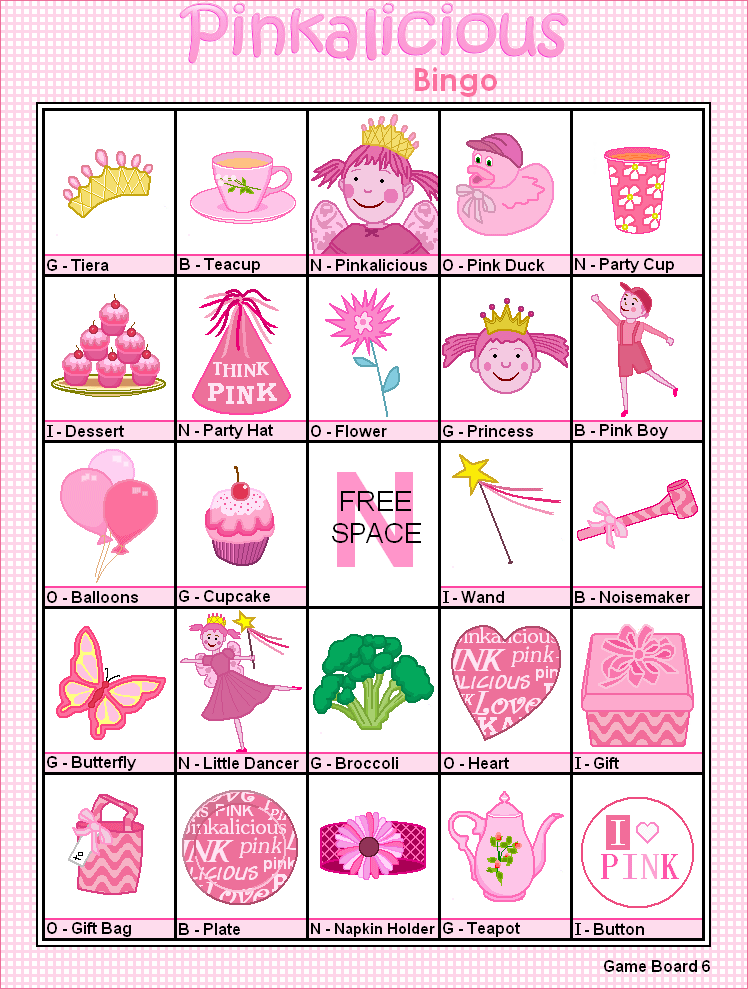 We used some unicorn cereal (I know, not healthy but it was themed!). The girls loved threading cereal on to their ribbons. 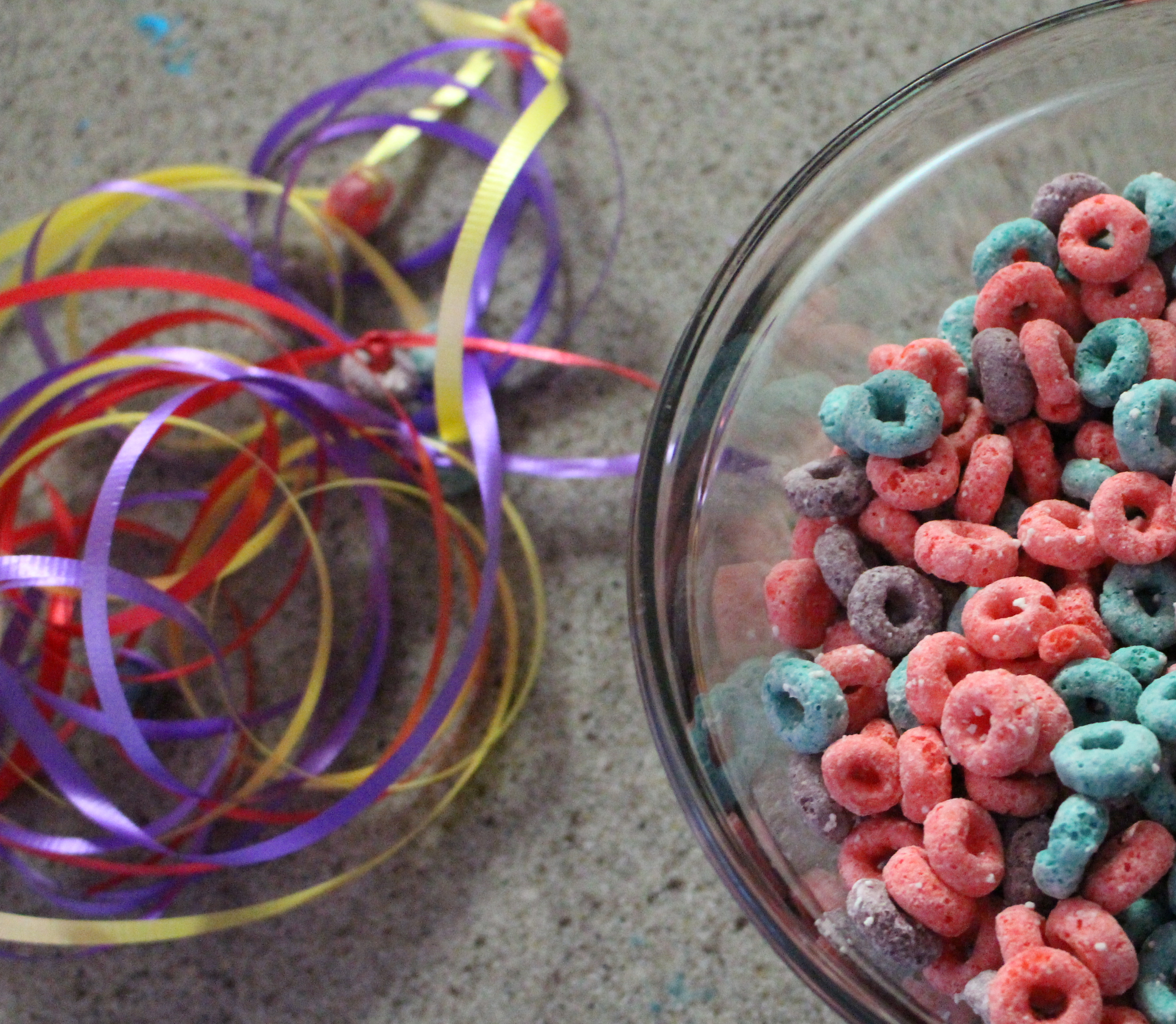 They were so cute too as they chatted about important first grade matters and made necklaces.

This idea is a lot of fun too. The girls loved designing and personalizing their own tea party cup. This was my biggest splurge item, but it turned out to be a fun activity. None of the girls brought the cups home with them though so the price is a little steep but it definently took them some time to do. The kit comes with stickers and cups and I had some Sharpie markers that i had bought for work last year so I let the girls customize them a little more. 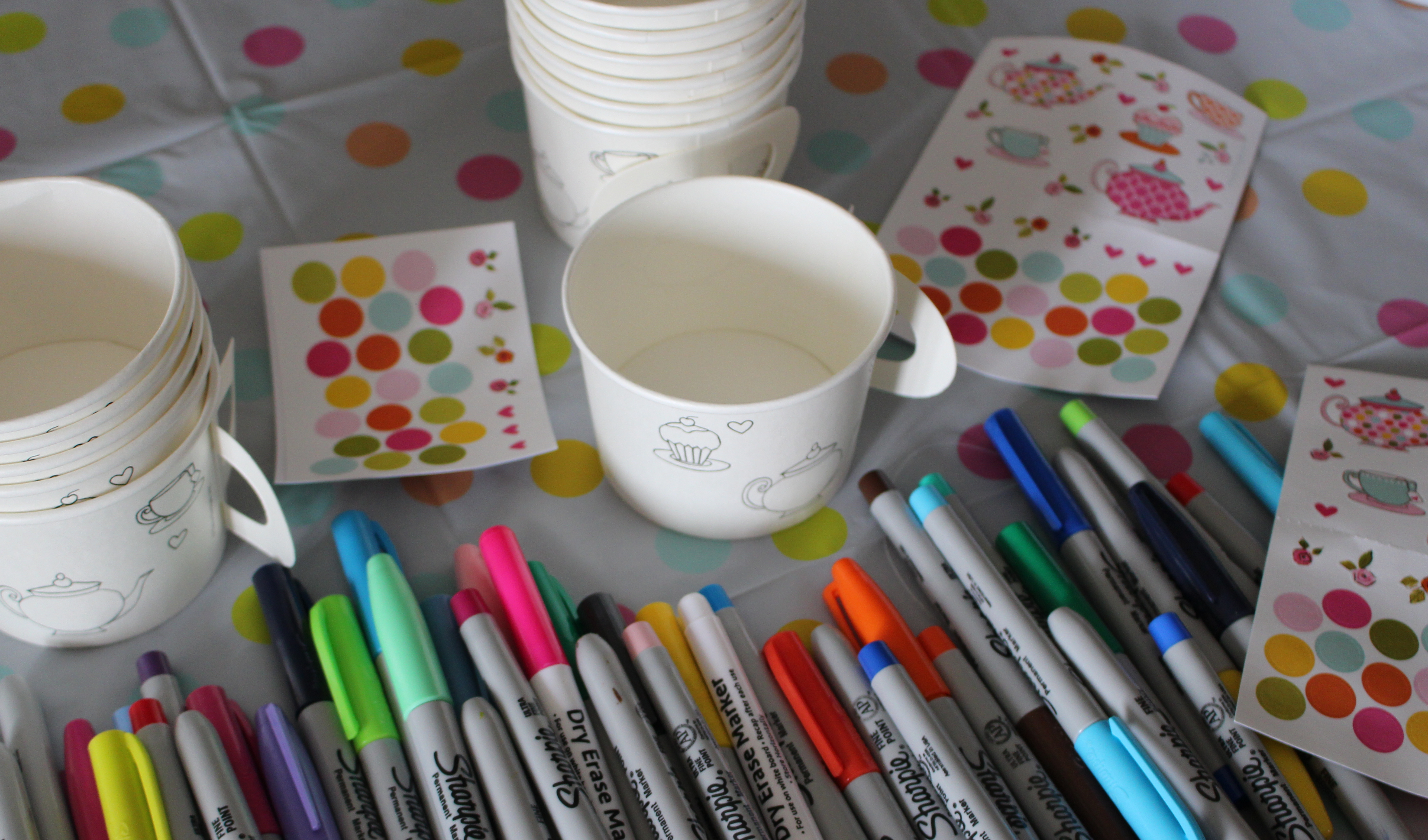 This takes some work but the girls LOVED making their own tea party hat.

Simply buy some paper hats and bowls. Cut the inner part of the plate, then slide the bottom of the bowl through and glue. punch two holes in the plate and thread ribbon through so girls can tie them. Our girls had more fun just designing the hats and then wanted to put them away. I found the flowers at Dollar Tree. I found some after i had bought the ones at Dollar Tree in the clearance section at a craft store. 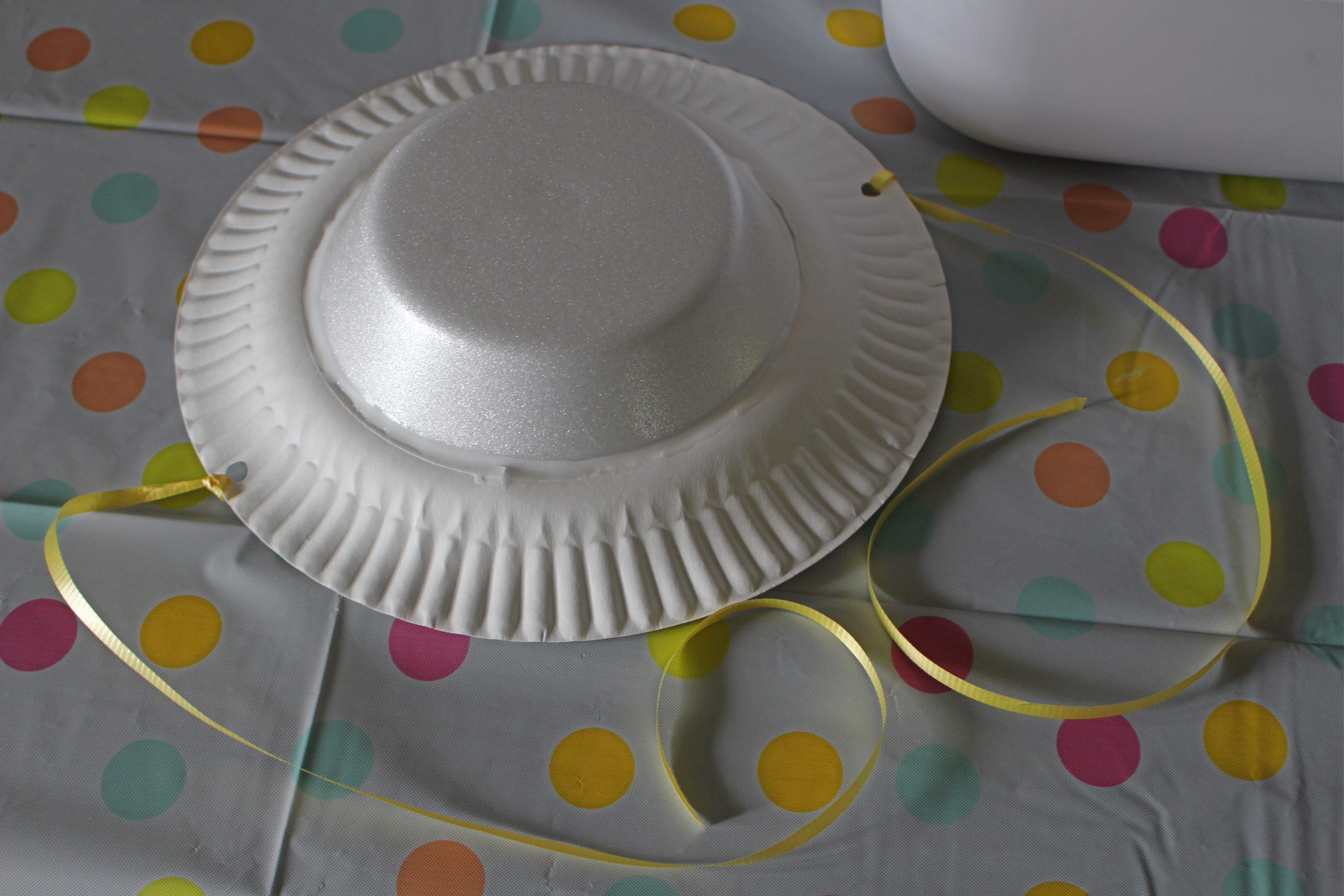 I just had the girls pick which flowers they wanted and let them hot glue them on. Most of the first graders could easily hot glue their own flowers on. 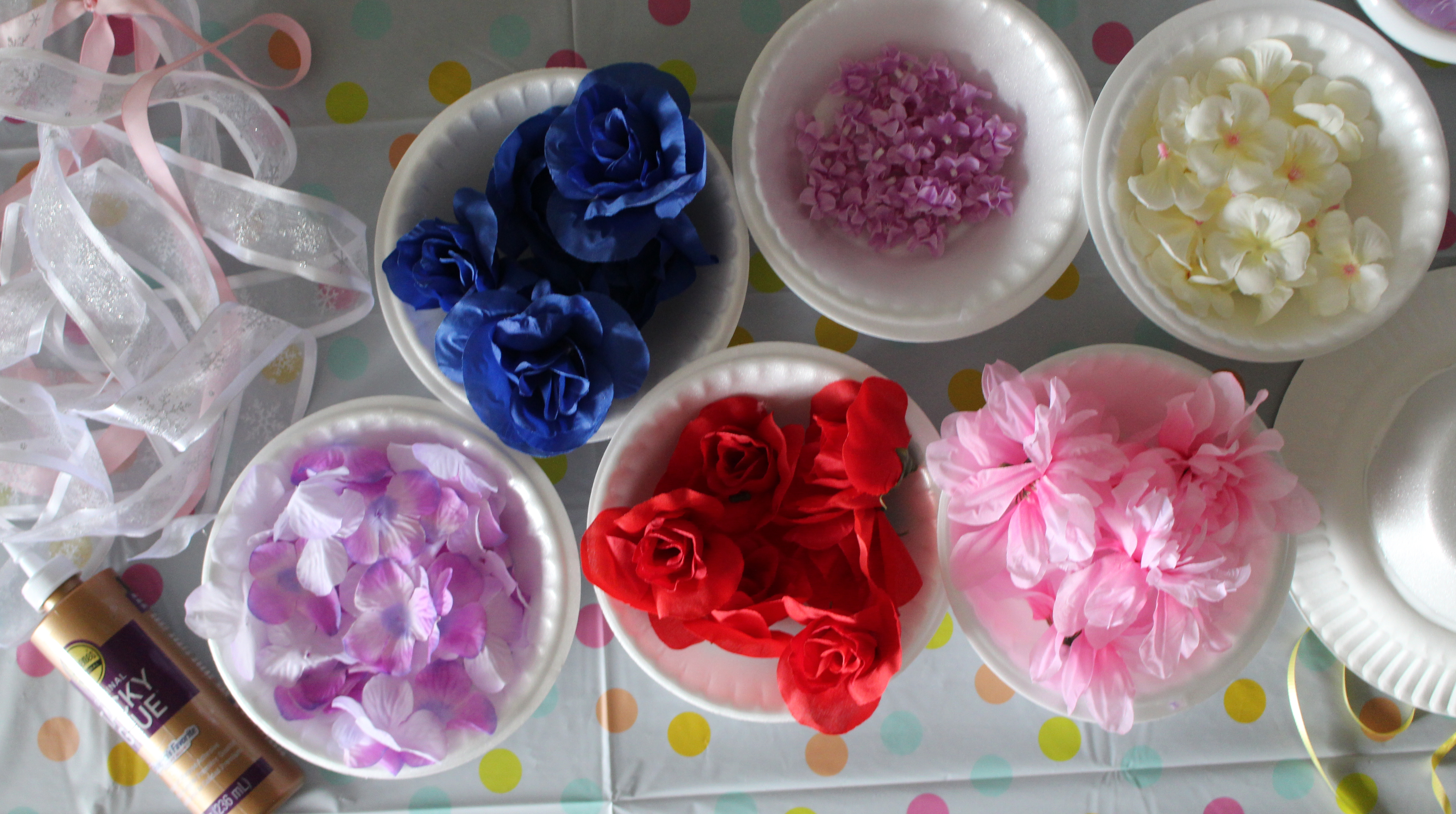 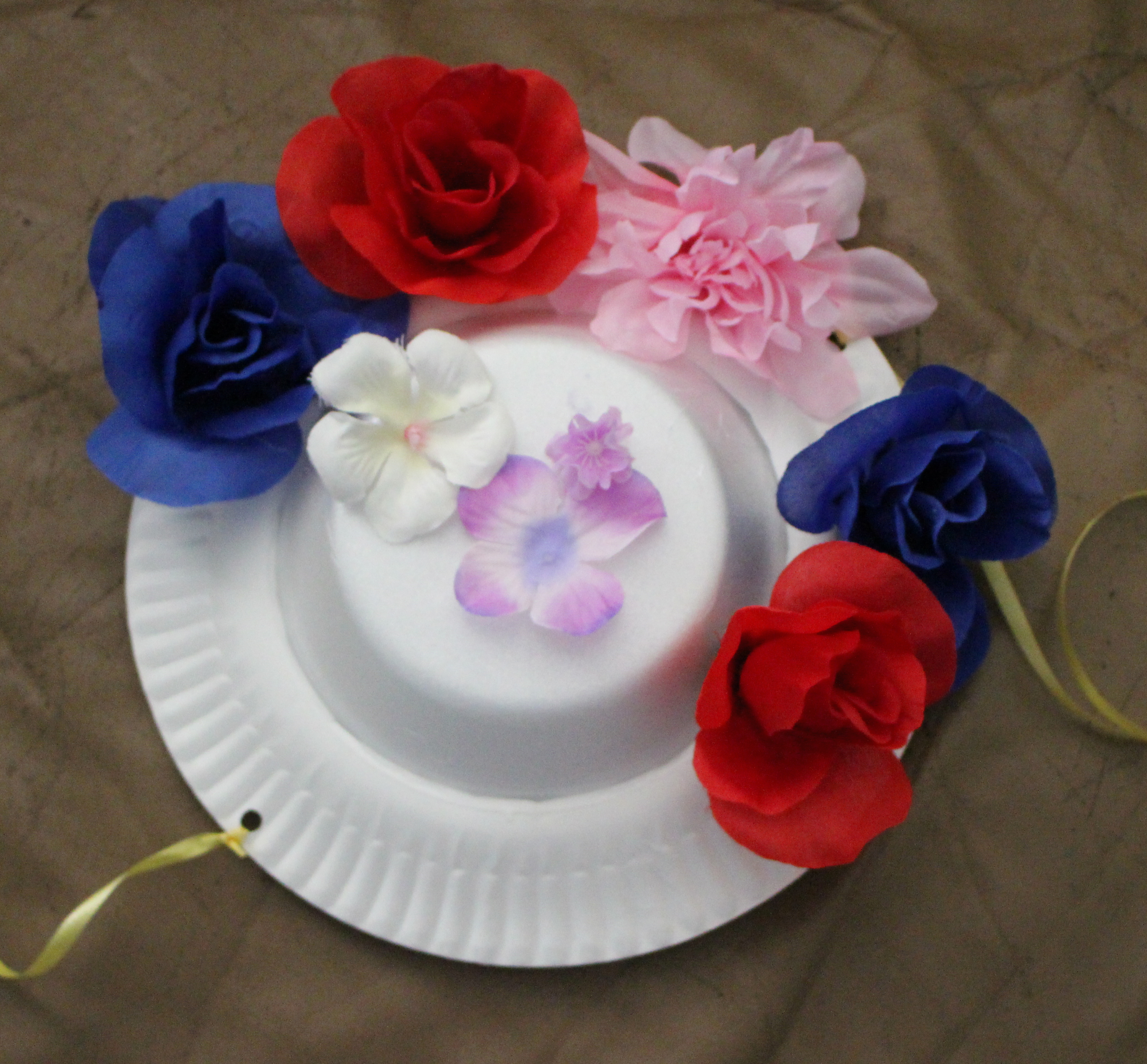 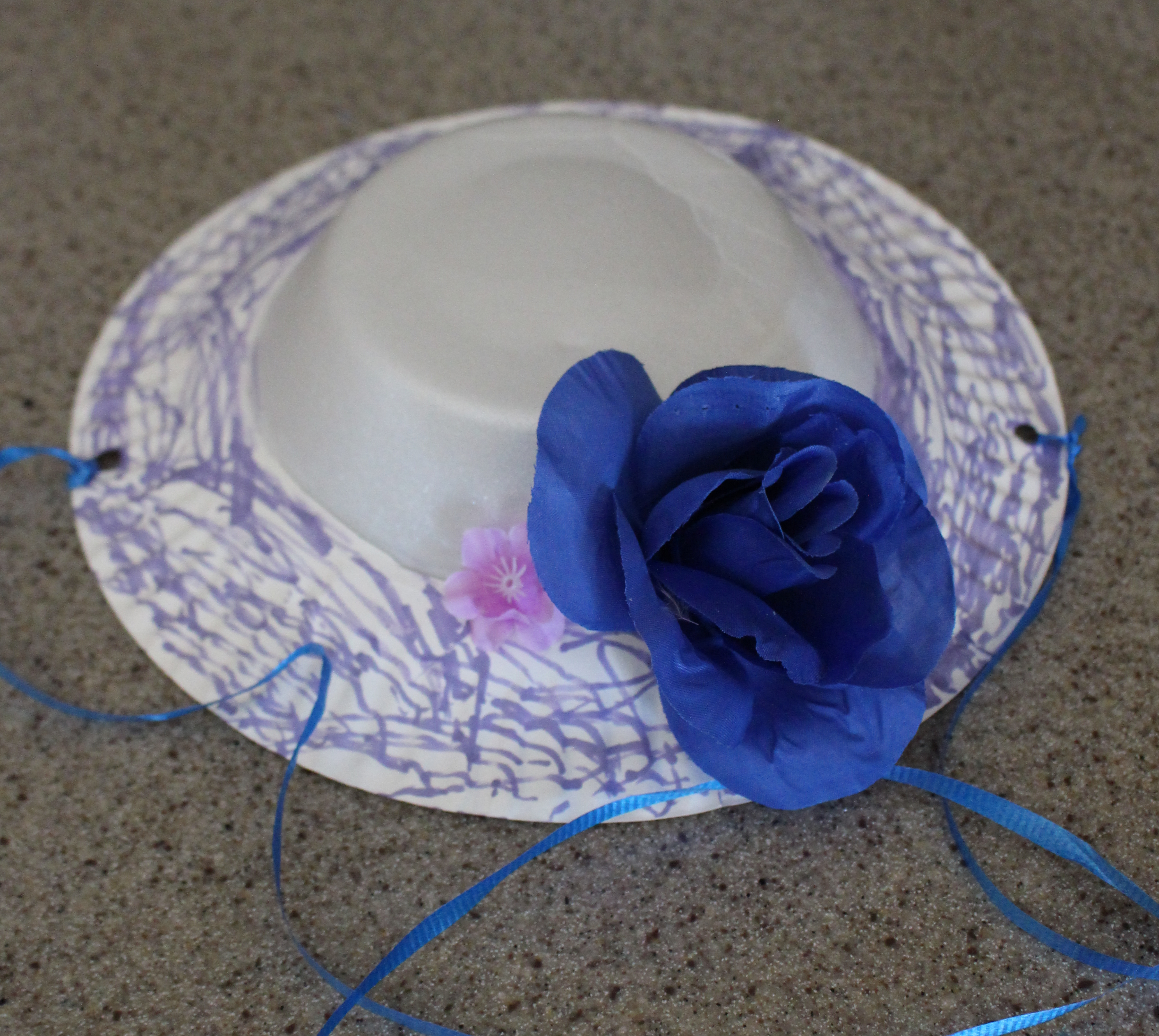 At the end the girls had their lunch with hats and cups. Happy 7th birthday sweet girl!! 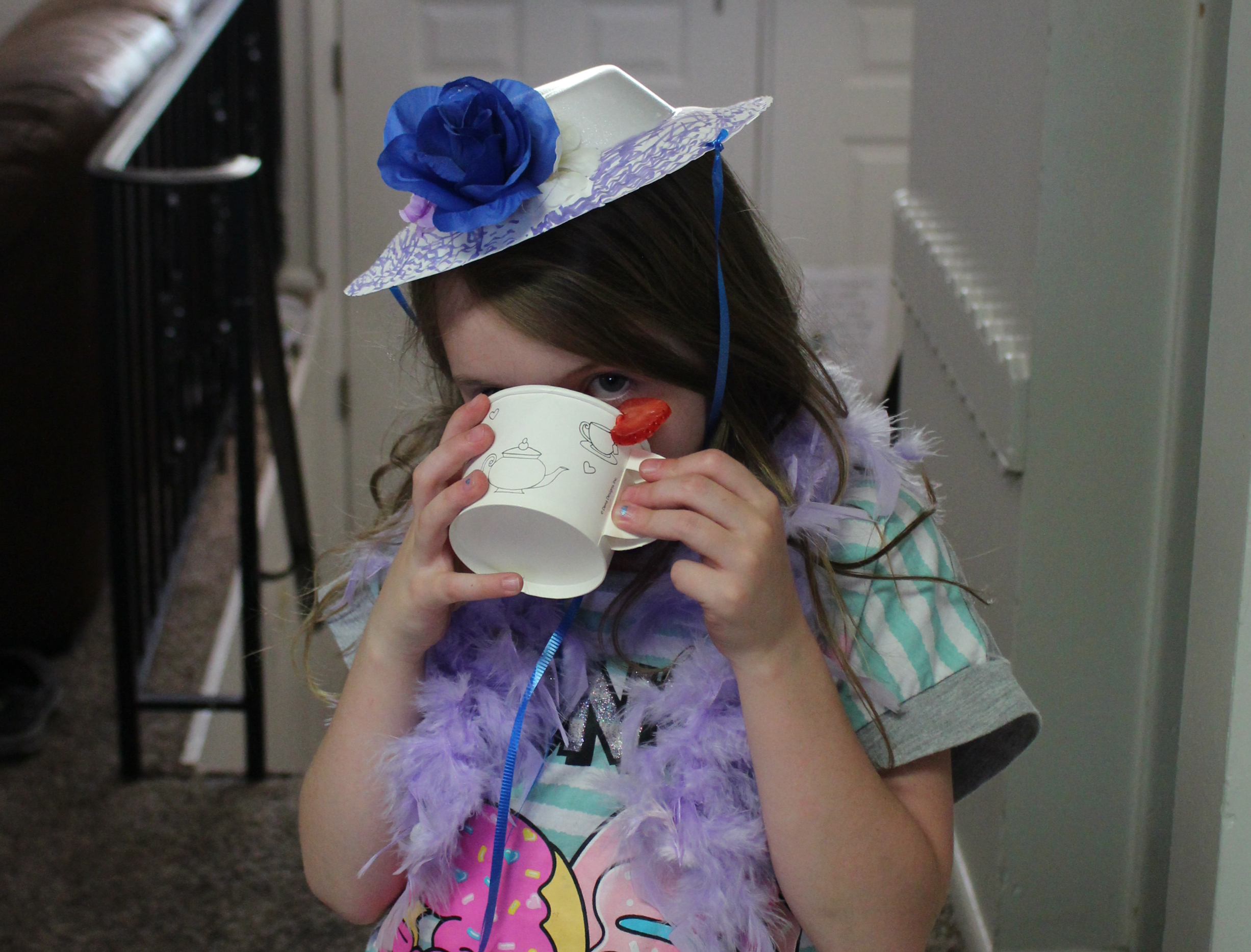 Feather boas: We bought the feather boas from Dollar Tree and cut them in half to save expenses.

Not Pictured: My boyfriend had a bounce house we set up in the backyard and he was a trooper to be in charge of the outside while i was in charge of the crafts and food inside. The girls loved being able to do a craft and then run outside then back inside then outside, then inside...there was a lot of cleanup involved after the party. 🙂 We both ended up taking a nap after the party but our two girls had had so much to eat they were on a sugar high and played straight until 10 o'clock at night. We also made it to the city fair, parade and fireworks. It was a whirlwind day but the kids had a great time and her hug at the end was so worth it.