Ahoy! We hope you didn't miss our healthy baby birthday cake on Wednesday because today we've got something even more fun planned for you--the accompanying (not healthy) Pirate Birthday cake. Since it was for my sister's son, she wanted a Jake and the Neverland Pirate cake. 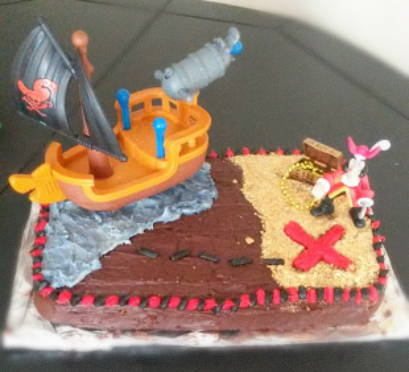 Inside the cake are some hidden pirate treasures--arrr!! 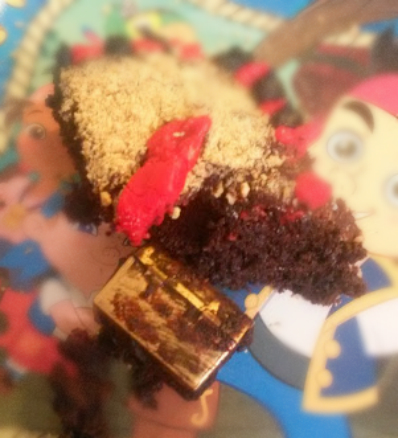 For half the cake, we made it adult friendly--meaning no surprises when you bit into a piece. For the kids side, we tucked a few hidden treasures inside--gold coins, beads and a treasure chest. They stayed perfect through cooking and the kids had a blast digging through their cake while eating it. 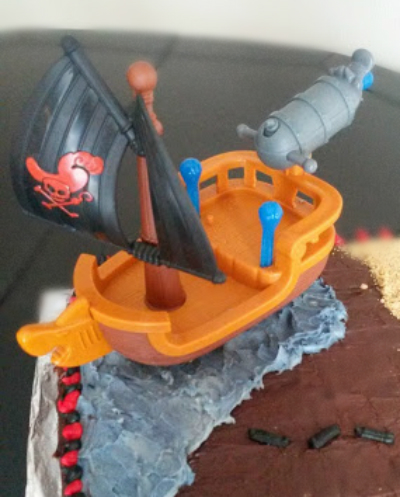 The cake was the Hershey's Perfectly Chocolate Cake and Frosting Recipe. It's my go to for chocolate cakes. I then whipped up a little buttercream frosting, grabbed some black licorice and crushed up some graham cracker crumbs. 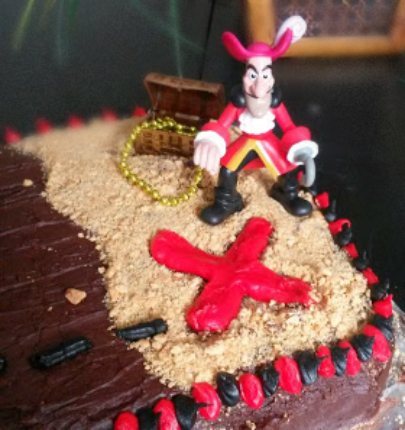 The cake was a hit with the kids and the adults. And the little guy learned a few lessons from his older, wiser cousin about cake smashing and other ways to invoke trouble on parents. 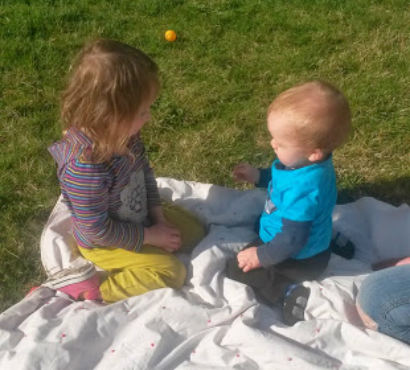 1 Jake and the Neverland Pirates Hook's Battle Boat (or similar)

Draw a large red "X" with your buttercream on an area of the sand. (You may need to dust away some of the loose graham crackers to get the buttercream to adhere.

On a corner of the cake opposite the graham cracker sand, roughly spread the blue frosting across the corner moving towards the center of the cake on a diagonal. To make waves, take your frosting spreader and move in small upward strokes and swirls to resemble water. Place the pirate ship on the frosting water to measure if needed.

Place the pirate ship on the water and the treasure chest with beads on the sand, close to the "X."

Use the red buttercream and cut black licorice pieces to make a border. Use large pieces of black licorice to lead from the pirate ship to the treasure.