It started back in college. Four nineteen year old girls, one tiny apartment and one badly made meal. One terrible evening of holding stomachs, grimacing in pain, and groaning instead of laughing through our favorite show...Friends. Yeah, I'm THAT old. And I'm not ashamed to admit that I still watch reruns.

"I've HAD it!" one roommate exclaims, walks outside to shared landing and returns several minutes later. "I feel sooo much better now."

So started the establishment of the "Free Fart Zone." 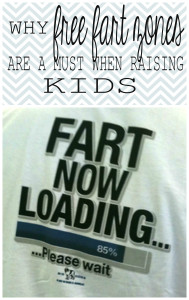 My son says, "Don't worry Jake. It's a free fart zone." He then helps his friend out by having a slip of his own. Then several of HIS friends help out Jake and my son.

Several minutes later I walk through the room and just about pass out.

After the friends have gone, we have a chat about the "Free Fart Zone" and how it needs to probably not be the living room for the people that have to walk through.

The "Free Fart Zone" has been a great addition to our house. It also makes you a pretty cool parent to the neighborhood kids. They think you're pretty awesome. It also makes those burnt meals I make on occasion a little easier to digest. 🙂

My suggestion? Make your free zones outside or in highly vented areas. For everyone else's sake.

P.S. If you made it through my incredibly weird post today, you've only got one more day to enter to win over $250! You've got three chances to win, so enter now!