A delicious recipe for a gluten free pizza crust that makes a gluten free personal pan pizza--just like the ones you would enjoy from Pizza Hut and other pizza stores!!

At my son's birthday party this year, one of his friends had a gluten allergy. My son and this friend hit it off the minute they met and go back and forth across the street to each other's houses the minute they get home from school each day. I love making sure that I have a few snacks on hand for his friend, including some better snacks like meals. Because boys at this age are always eating and if they get creating or making something, stopping to eat has to happen...now. So I always make sure that I have something more substantial on hand for both of them. 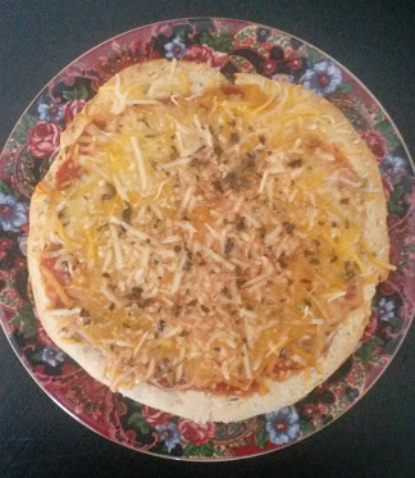 This gluten free personal pan pizza has received a stamp of approval from both boys. This recipe made three so I usually freeze them and take them out when needed. Since I've already cooked them, I just place them in the microwave and they are ready in a minute or two. Perfect amount of time to make a meal for growing boys.