I am a creature of habit. A bowl of cereal for breakfast, a salad or sandwich for lunch and a vegetarian or chicken dinner. Not much deviation from the norm for me. Oh, occasionally I'll opt for a green smoothie, but most days I only have time for cereal. 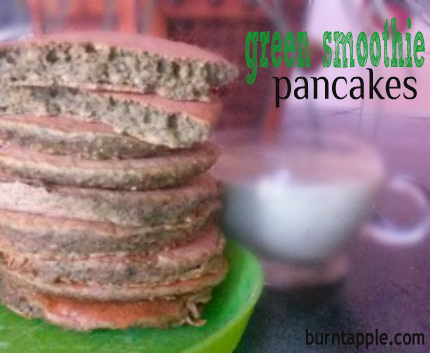 Today I decided to change things up a bit. I had a really big craving for a hot stack of pancakes lathered in butter and syrup. The run I knew was coming up later in the afternoon changed that a bit for me (no one wants to feel that jiggling around for six+ miles and instead I decided that I would make my green smoothie into green smoothie pancakes.

It was delicious. The flavors came together perfectly and soon the little ones started drifting into the room. Breakfast became a family affair and we had a great time over our rather uniquely delicious breakfast.

To serve: This is a festive pancake to serve at St. Patrick's Day. Serve topped with whipped coconut milk, whipping cream, or vanilla nonfat greek yogurt as a leprechaun cloud.