When the ice cream truck comes singing down our street, there is one person who will go running to greet the man in the little white truck with pictures of various frozen treats plastered across the sides. That man could run 4 minute miles if he kept the pace he keeps going up those stairs and out the door. He is so fun to watch transform from Dad to kid again. His favorite treat? 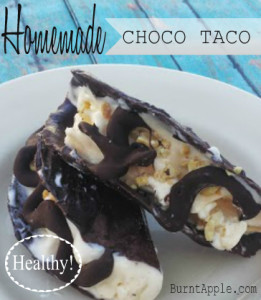 Well, seriously, did I need to ask the question since it's in the title? 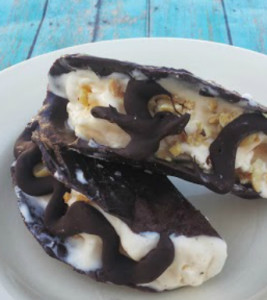 When Cooking Light came out with their summer magazine and I caught this recipe I already knew this Choco Taco recipe was going on the list of recipes to try. Could you really make a Choco Taco healthier but still great tasting? 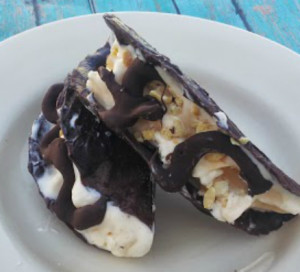 Calories per serving: 233 per taco

Fat per serving: Under 12 grams per taco

Can you make the traditional choco taco healthier and better tasting? Um, yeah. A chocolate dipped shell, peanuts, ice cream and chocolate drizzled on top comes together into one incredibly low calorie dessert.

* We usually double the recipe so that we can freeze extra. They seem to go really fast around our house. Freeze in an airtight freezer bag for up to one month.