We called him Nanny McPhee for several weeks while he refused to pull that front tooth. Instead, it hung at a precarious angle, teasing us to pull it every time he smiled. But he wouldn't let us pull that tooth.

When that tooth finally fell out (with much bribery and maybe even a little reverse psychology on his parents part) it brought him more relief than it did us. He said he felt so much better. He was also super excited that the tooth fairy was bringing him money at the hotel. His sister might have lost a tooth in the toilet one time, but HE got the tooth fairy to visit him in the hotel. 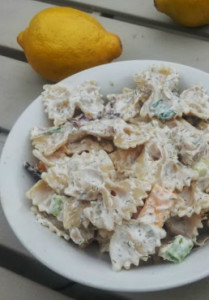 Sometimes being a little stubborn can pay off. (And not just in tooth fairy terms).  Like the fact that although I absolutely love lemon everything, I still haven't tried a lemon pasta. Lemon chicken, yes. Lemon bars, yes. Lemon pasta? Haven't quite been that adventurous yet. But this lemon pasta salad recipe caught my eye. 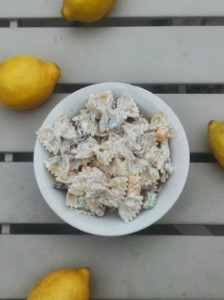 My thanks goes out to Bobbi of Bobbi's Kozy Kitchen for getting me out of my lemon rut and making me try something new. I got to surprise Bobbi by featuring one of her fabulous recipes as part of the Secret Recipe Club.

The pasta is creamy and rich with a touch of lemon and dill. Peas and bacon finish the dish off. I made our dish with greek yogurt instead of sour cream, multigrain mini farfalle for the mini pasta, and Cabot 1% cheese for the cheddar. You have got to try this perfect summer recipe!

You can try this and other fabulous recipes from the Secret Recipe Club!

Click here to access the recipe.
To see other great recipes from Secret Recipe Club members, visit the links below!