Last night we broke out the new ice cream maker after making these pesto chicken sandwiches. As with anything new, it was a revolving door of people checking on the ice cream every thirty seconds. Thirty five minutes waiting for ice cream seemed like eternity! First Mom goes outside to check on ice cream maker, followed several seconds later by kids who come back in exasperated and asking how much longer. Then one year old checks on ice cream maker, turns it off, and comes back in saying, 'uh oh eye keem.'

Dad runs out, turns back on ice cream maker, followed by Mom who then is followed by kids and you pretty well get what happened. The ice cream took much, MUCH longer than thirty five minutes to make.

That's kind of how getting dinner ready every night is like at our house. Child #1 needs help with homework. Child #2. Where is child #2? Go find him and after I find Child #3 on the counter taking everything out of the cupboards and saying 'cookeee? aw you?' 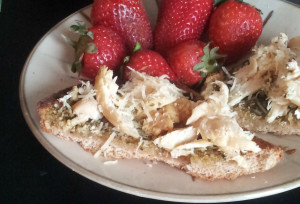 Do me a favor. When you make these (because I know you will, pesto on anything is Ah-MAZING!) go ahead and make up the chicken ahead of time. Save yourself some time. You can grill it, boil it, bake it--whatever you decide. It will save you a ton of time. Freeze it and take it out before you eat. Or make a big batch of chicken on Sunday and use it through the week. You are the boss.

Each crunchy bite of bread is filled with pesto, parmesan and chicken. Life is good. You've got pesto.