So you have a fabulous cupcake recipe for St. Patrick's Day. Now you've just got to figure out what kind of cupcake holder to put that beautiful cupcake in. 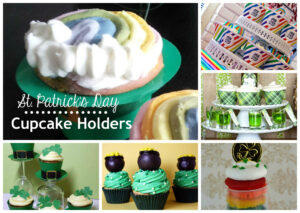 It shouldn't be hard with this handy guide to some of the best looking cupcake holders and toppers on the web. We found our cute cupcake holders for our rainbow cupcakes at Dollar Tree. Simple and easy!