This Starbucks Turkey Bacon Sandwich is only 320 calories! Try this easy breakfast recipe--it's like going to Starbucks in the morning without having to get out of your PJ's or stand in long lines!

So what if I told you that you should really think about getting some food next time you stop in for your morning Starbucks coffee? No really. It might surprise you that they serve food. It surprised the employee working at Starbucks who said, "You are placing a food order?" like it was his first time he had had a food order placed,  only it said "team lead" on his tag so I knew he had to have been working there awhile. 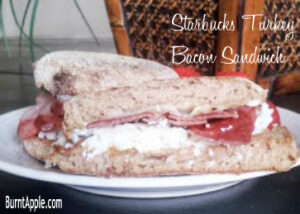 Rarely do I get the chance to walk into a Starbucks anymore unless I want to tote along three kids who inevitably will request something too bringing my total spent from $5 to $50 in a matter of seconds. They are wonderful little budget breakers. So when my husband and I ducked into Starbucks on a recent trip to San Francisco, he introduced me to the best old fashioned baked doughnut ever.

Oh, and this even healthier Turkey Bacon Sandwich. I now make them at home for the kids and myself. At much less than it costs to go into the store. And thankfully I don't have to be tempted by the doughnut either! (Did I tell you it knows my name?) 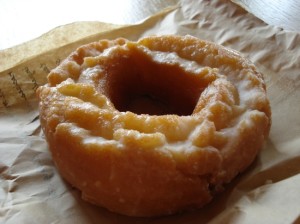 At under 350 calories, this Starbuck's Turkey Bacon Sandwich has all the ingredients you need to get your morning started off right!