One of my kids favorite breakfast meals includes a piece of buttered whole wheat toast, sprinkled with cinnamon and coconut sugar. Or sugar. It depends on if I make it or they make it. "They" like to use the white stuff.

My sweet older daughter went to put her toast in the toaster while her younger brother sat back and whined that he didn't get to put his in first. I started in on my usual lecture about sharing and giving one piece of toast for him and one for her and he would then return the favor when all of a sudden the toaster started smoking. Smoke came flying out the top and my daughter pointed at the toaster and said, "Mom, I think you did something."

1. Anything that starts smoking in the house is ALWAYS my fault. Regardless of who put the toast in the toaster.

2. My kids rarely if ever panic anymore when smoke comes flying out of an appliance. It's a pretty regular occurrence.

3. Baking soda must be bought in bulk.

After unplugging the toaster and removing the bread, we found the guilty object:

What some will do to get out of taking their medicine. 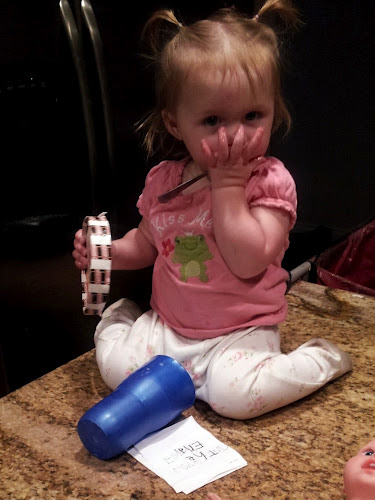 Don't let the cuteness factor fool you.  She will do ANYTHING to get out of taking her medicine.  Smart idea though!