Home » Blog » Uncategorized » Thursday's Thoughts: The Things I Didn't Know About Addison's Disease That I Wish I Had

Addison's disease is considered a rare disease but I'm meeting more and more people who have been diagnosed with it. It is an adrenal insufficiency caused by a lack of certain hormones being produced. The two hormones not being produced are typically cortisol and aldosterone. Signs and symptoms of Addison's disease include fatigue, weight loss and appetite changes, darkening of the skin, low blood pressure (I would even go as far as extremely low blood pressure), salt cravings, nausea, diarrhea and vomiting, muscle or joint pain, irritability, depression, and body hair loss. Interestingly, these symptoms even after being diagnosed are also the symptoms you notice if the Addison's disease medication dosage is not correct.

Addison's affects your ability to deal with stress since your body doesn't make cortisol...the necessary hormone that is produced when your body is under stress. If you don't take cortisol artificially (through a pill), your body may go into an Addison's crisis. During this time you suffer some of the above symptoms but may also deal with severe weakness, confusion, pain in the lower back or legs, severe abdominal pain, vomitting and diarrhea, and delirium.

The treatment for Addison's disease is through pills. Aldosterone--the hormone which regulates water and salt balance in the body is usually replaced by taking a pill--typically Fludrocortisone acetate. This also helped regulate his blood pressure.

The other pill commonly taken is to replace cortisol in the body. Cortisol helps you respond to stress and danger. To replace that hormone, pills like hydrocortisone, prednisone, or methylprednisolone are taken.

Addison's disease on it's own sounds easy to manage. I can remember we would always tell people "it's just a couple of pills to manage Addison's unless he's under a lot of stress--it's no biggy." But Addison's slowly became a beast in our marriage coupled with the Type 1 diabetes.

There are several things that I wish I would've known about Addison's disease that unfortunately I didn't find out soon enough. While I am not a doctor and this cannot be treated as medical advice, hopefully this can help you or someone down the road:

Get a good therapist. On speed dial. We went to therapy several times throughout the course of our marriage as a couple. Understand that your therapist will probably NOT understand the dynamics of Addison's disease. But Addison's disease can take a toll on a family and relationship and that is something a therapist can help you through. I wish that more diabetes clinics and endocrinology clinics employed social workers and therapists to their staff pool in addition to the dieticians, nurses and other specialists that they have you see. A lot of the things we were facing weren't always physical, but mental too. The irritability, anger, depression and anxiety could be overwhelming at times and wreak havoc on our marriage. Many times I felt like a single mom because he would work all week and get through work and then be sick all weekend. It takes a toll on a marriage when you are constantly on your own taking the kids everywhere. Allowing an open area to communicate some of my frustrations and he his was crucial, but I think we could've utilized therapy more.

Our doctor was amazing, but when we walked into the office and he would play with his dosages of cortisone I should've also asked to read some of the studies he was too. (I'm also a research geek so I would've found it interesting). But for us, when we would go into the office and his doctor would slash his cortisone dose in half feeling he was "too medicated" based on a study he read, it would affect his diabetes. And that would affect his mood. And then it would affect our relationship. And then he would get sick. And then...

At the end of the day I should've asked more questions on how this was going to affect him. And tell my doctor how it was affecting him. Not being rude, but just more inquisitive. I kind of had the attitude that Addison's disease was just easily controlled by taking pills. If his cortisol levels came back a little high, it was no big deal to cut his corisone in half. But it was.

The last half of our marriage was probably the toughest. My situation was unique in that I'll never know what really caused his behavior to change (we know he was an on and off switch on caring for his diabetes which may have also exacerbated things and caused inflammation of his brain with long term high blood sugars) but I saw a steep decline the last few years of our marriage. I saw a definite increase in his psychosis, delusions, and anger.

I remember a few years after my youngest was born we were sitting at dinner with some friends and my then husband started to go into a tangent at the dinner table about how I had "stolen" this baby from him and "tricked" him into having another child. He had been done but I had "tricked" him. He went on and on and on putting me down and saying some awful things about our daughter, to the point it was making myself and our friends uncomfortable. (They even called the next day to make sure I was okay). They calmly asked how long we had tried before having her and I said, "we had a conversation. I felt we had another child. I told him I wasn't sold on the idea of having another child (pregnancies are hard and all my kids have been preemies with a lot of needs), but I would give us one year. If after one year I didn't get pregnant, I would get another IUD. Right at the one year mark (my IUD appointment was set), I found out I was pregnant. Some people call it coincidence, others a sign. I don't know but I wouldn't trade her for anything and I see now why our family needed her." He replied with an angry outburst of "see??? She TRICKED me!" Our friend replied with, "dude, you guys were trying for a YEAR. If you didn't want another one, there are ways to prevent that. A YEAR dude." My exes eyes were hollow and he didn't get it, he just kept going on his tangent. It wasn't connecting in his mind.

That would be the case for many other occasions.

I also wondered if some of this delusional behavior and anger and other things were due to long term steriod use. There are now some good evidence based studies linking steriods and psychosis. A study in 2006 linked steriod psychosis to symptoms like depression, hypomania, irritability, anxiety, insomnia, restlessness, fatigue, impaired memory, concentration, and psychosis. My ex had ALL of the above. But not once did our doctor in the 20+ years he took steriods ever ask about any of these symptoms or possibly link any of the concerns we brought forward to possible side affects of the steriods. Going back in time, I would definetely be asking those questions of my doctor and probing a little more. A more recent study in 2012 aimed to debunk the myth linking steriod use and psychosis, however it did state that serious neuropsychiatric effects occur in about 6% of patients who were on long term steroid use. That's a large enough group of people that I would be asking my doctor more.

One thing that was always difficult was what to do when he was under stress. With a family, finances, and all the stresses of life it seemed like we were always under stress. When he was under a lot of stress though and it got to the point that he got really sick there was a fine line between a visit to the emergency room or being admitted to the hospital, or just needing to up his hydrocortisone dose. We were always told to double our dose when he was under stress for 2-3 days or if he was sick but I've read somewhere where others with Addison's disease have been told to triple or quadruple their doses and do it for the duration of the stress or illness. It would be nice to know what is the proper dosage for stress and illness as a lot of times doubling the dose for a couple of days didn't seem to work and we just ended up with a costly hospital stay. It would be nice if doctors got together and gave patients a little better information on stress doses and durations and if that could be a little more universal to hopefully avoid costly emergency room and hospital stays.

Addison's disease is not just taking a pill. There is a fine line. While most people may control it easily with pills, in our case coupled with diabetes and lack of care, it was a beast. Having family support is important as it can be a difficult thing to deal with. And there were a lot of times that it was very hard. He would push all week and then spend all weekend sick. It was difficult to go to everything alone and I found that my own self care lacked a lot. Not living close to family was also difficult. In hindsight, I would've felt less guilty about hiring a sitter or asking family to come help so I could take a nap or run some errands or just sleep!! I'm not very good at that so I'll understand.

In conclusion I highly recommend:

Make delicious gluten free bread in under two minutes plus learn to make quick bread, rolls, breadsticks and more in under thirty minutes using ONE base ingredient! 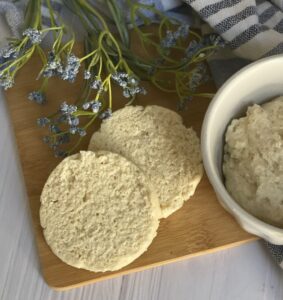 Get a Month of Five Ingredient or Less Meals!

Create amazing dinners with a few simple ingredients. Get inspired by these five ingredient or less meals ideas! 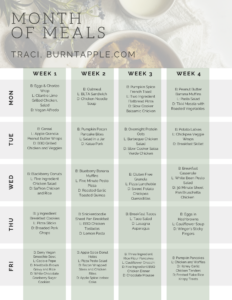