Don't let fall pass you by without trying these delicious pumpkin snickerdoodles! Soft and chewy and filled with pumpkin goodness, this is one pumpkin recipe you will put on your annual fall baking list! 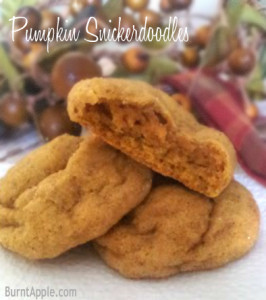 Several afternoons a week, my 50 pound companion and I head up the canyon for a jog. This time of year is so beautiful with the leaves changing colors. She is a bird hunting dog, and is fun to watch as we run. She usually runs several lengths ahead of me sniffing for birds, her body going rigid at attention when she finds some. Squirrels though? They are a different story. She will go racing off the road into the bushes to chase those. They are fair game.

On our run the other afternoon, she went off the side of the road to investigate something. Thinking maybe it was another dog I thought nothing of it. She then came racing back and heeled right at my side. She never does that! She is always too busy exploring. I kept running and the dog stayed right at my side. Several minutes later a couple on bikes stopped me and said that they recommended I turn around and head back. They spotted a bear on the side of the road not ¼ mile away from me. 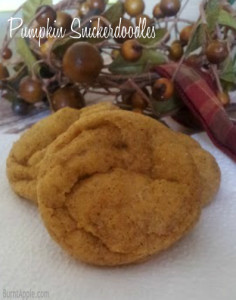 Not wanting to become friends with a bear, I took the couple's advice and headed back down the mountain. Last year we spent the summer in Vallecito, Colorado and saw bears all over the place. They would come right past your car in some areas. They were bigger than I thought--even the "little" black bears.

I think we made our best time ever down the mountain. Adrenaline is a great motivator. I also decided it was probably time to end the canyon runs and save them just for my long Saturday runs when the canyon road is full of people.

When I got back down my trusty GPS tracker app showed me how many calories I had burned. Running scared is good for that. I was tired though, and my freezer was full of these yummy pumpkin snickerdoodles I was saving for the football game. I decided to have one as I headed to the shower. These cookies are the perfect pumpkin recipe! If you missed out, we shared a whole week of amazing pumpkin recipes. I saved this one for later--I didn't want you to get tired of pumpkin recipes!

Don't let fall pass you by without trying these delicious pumpkin snickerdoodles! This is one pumpkin recipe you will put on your annual fall baking list!