My husband loves going down to Taco Bell and getting one of the caramel apple empanadas from time to time. I knew that I could recreate them from home and make a healthy treat for all of us to enjoy. Alright, as healthy as you can make pie crusts. While I took away the fried oil, I left the butter. You can really only give up so much in life. I was able to make a really good empanada that was absolutely delicious and tasted better than the Taco Bell version. You can never go wrong with apples and cinnamon and caramel can you?? 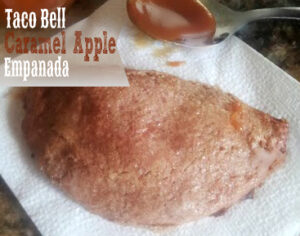 This recipe requires a few tricks to get it to turn out right. The first time around I made the dough myself and thought that I rolled it out thin enough. My husband complained that it tasted more like an apple pie than an empanada and lacked the crispiness of the empanada. So to save you some time and frustration, here are a few tips before you get started: 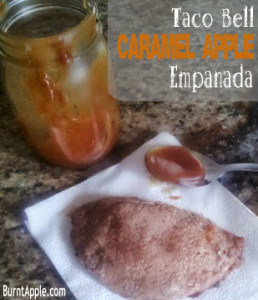 TIP 3: You can skimp and use storebought caramel sauce too. I won’t complain. We used our No Thermometer Salted Caramel Sauce and saved some to drizzle over the top of the finished baked empanadas. My husband tells me that putting more caramel sauce over it doesn’t make it a true empanada but I don’t believe it. You can never have enough caramel.

This recipe is part of the Lady Behind the Curtain Dessert Challenge. Our challenge this month was to come up with a dessert recipe that included apples and cinnamon. You can find more about the Dessert Challenge here. If you are craving apples and cinnamon scroll down and view some of the other great recipes that are a part of the challenge this month.