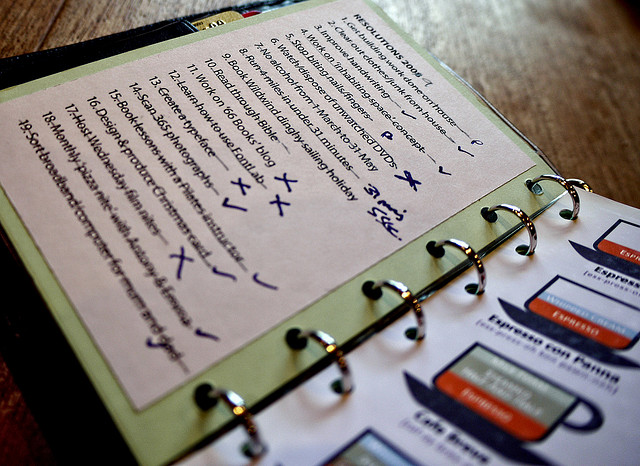 Do your New Year's resolutions just seem...daunting already? Have you already broken them or just sworn them off all together?

There are reasons that I think New Year's resolutions like loosing those extra five pounds fails. And why setting goals each time every year...fails!

Goals are Set in a Moment of Desperation...There Isn't a Motivating Factor

You had a baby and that extra ten pounds won't come off. Throw it on the New Year's list. Darn it, you are going to loose those ten pounds!

One week...two weeks...three weeks later the scale hasn't budged. Same numbers and now you have to dust off the gym pass.

When I made the decision to loose weight, it came with a motivating factor.. a huge component! I was eating right but I felt that exercise was hard to fit in. My motivating factor? An active dog and a toddler who refused to sleep in her crib since her brother and sister usually came home right around the time she would try to fall asleep. She would get excited to see them (or would hear them) and nap time was over! Getting her to nap and my dog exercised were my motivating factors--two and a half years later they still continue to be but I exercise out of habit now. It's ingrained. My daughter loves strolling somewhere fun with me--usually to feed the horses! She now even loves to try to run alongside with me part of the way.

Get your motivating factor and component, and you'll be on your way to success. And if you can't find one, move onto another goal that you are motivated to do. You'll find that keeping your New Year's goals will be a whole lot easier for you!

P.S. Thanks for allowing me to share a little something I learned before graduating. Because I've got to at least show that I am doing something with my degree, right?