My little boys birthday theme on Monday was Toy Story 3. We had a lot of fun. And I was surprised how into his party planning he got. We came up with a lot of fun games and ideas and are excited to share them with you.

We had a hard time finding games that were for slightly older boys. Most of them were geared towards 3 year olds. Since this was a party for kindergarten and 1st grade boys, I knew going in that I was going to have to come up with a lot of my own game ideas.

And with it being summer, these boys weren't too into the craft ideas that I found on several sites. They wanted to have fun--and keep moving!! While some of the ideas will only work for a party during the warmer months, you may find that some of these work just as well for the colder months too!

I admit it. I didn't do much in the way of directions. Kind of lazy. And our family isn't big into the decorations. But I did make some fantastic...

I would love these Woody Marionettes. What a cool idea for older kids. My favor boxes didn't have anything that cool in them. I used favor boxes I found at Walmart (8 boxes for $1.50) and used my favorite stuff in the world Mod Podge and adhered a picture of Woody to the front. I put each child's name on underneath Woody's arm and filled each cup with candy, a sticky hand, a Toy Story blowout I found at my local Target, Pop Rocks candy, a mini pair of binoculars I found at Dollar Tree and a couple of army men I found at Target (a whole pack was only $1). 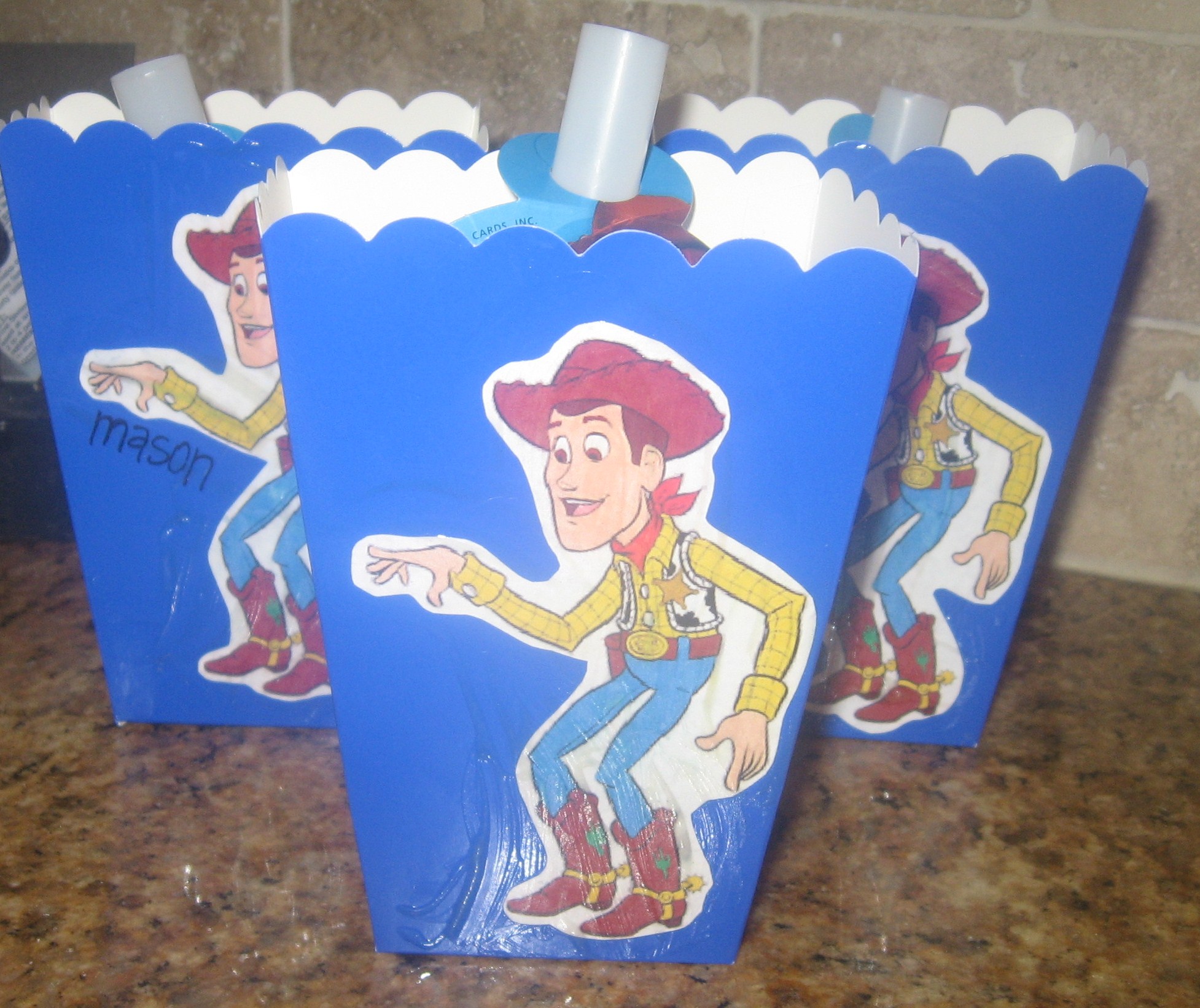 If you read my post yesterday, you'll know that I forgot the snacks. What was I thinking??? But I was able to come up with some last minute homemade microwave popcorn to save the day.

We had alien cupcakes and ice cream for my little boys birthday party with his friends, and made a Toy Story cake for his birthday with our family later that night.

Fine. At least the kids knew what they were. If you're looking for a prettier picture of the alien cupcakes, click here.

For the birthday cake, I happened to be at Walmart one day when my son as usual picked up some random thing from one of the shopping shelves. This time he picked up a cake decorating book, and he and my daughter entertained themselves by looking at all the cake ideas. 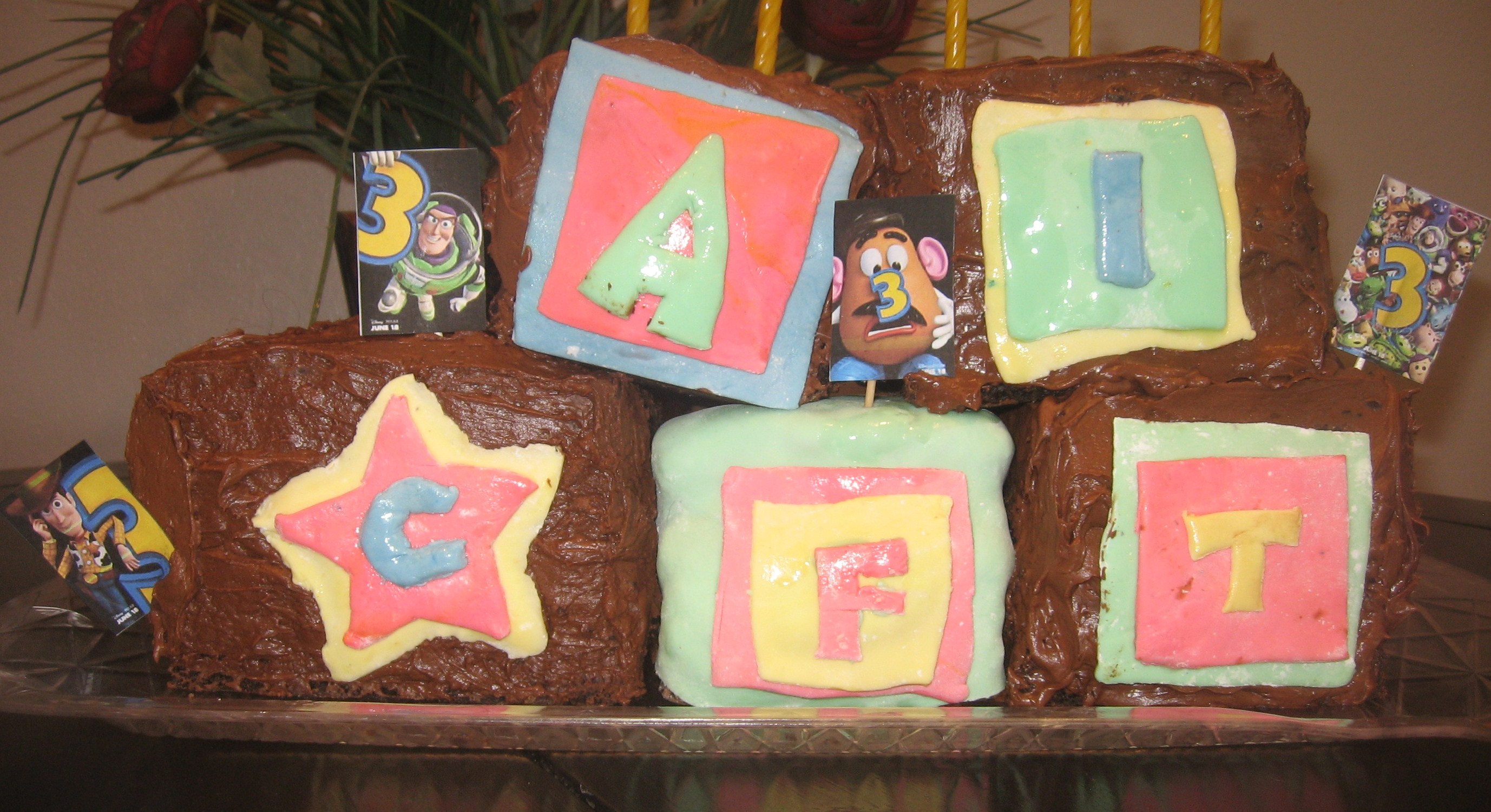 One was a cute a-b-c block idea that had figurines of Buzz, Woody and the rest of the gang on top. On my cake, I used marshmallow fondant to make the letters and squares. I used some printable pictures attached to toothpicks as the figurines. We used the Hershey's chocolate cake and frosting recipe since my little boy wanted chocolate cake for his birthday. Iwill admit to my first fondant attempt being an absolute failure. I thought my second attempt would be just the same. I had to deviate from the recipe because I sent my husband to the grocery store. He came back with large marshmallows instead of mini. So I added a tbsp of butter to them and melted them stove top. They still turned out great! (Just a note: the fondant recipe called for 4 cups of powdered sugar and I only used about 3). 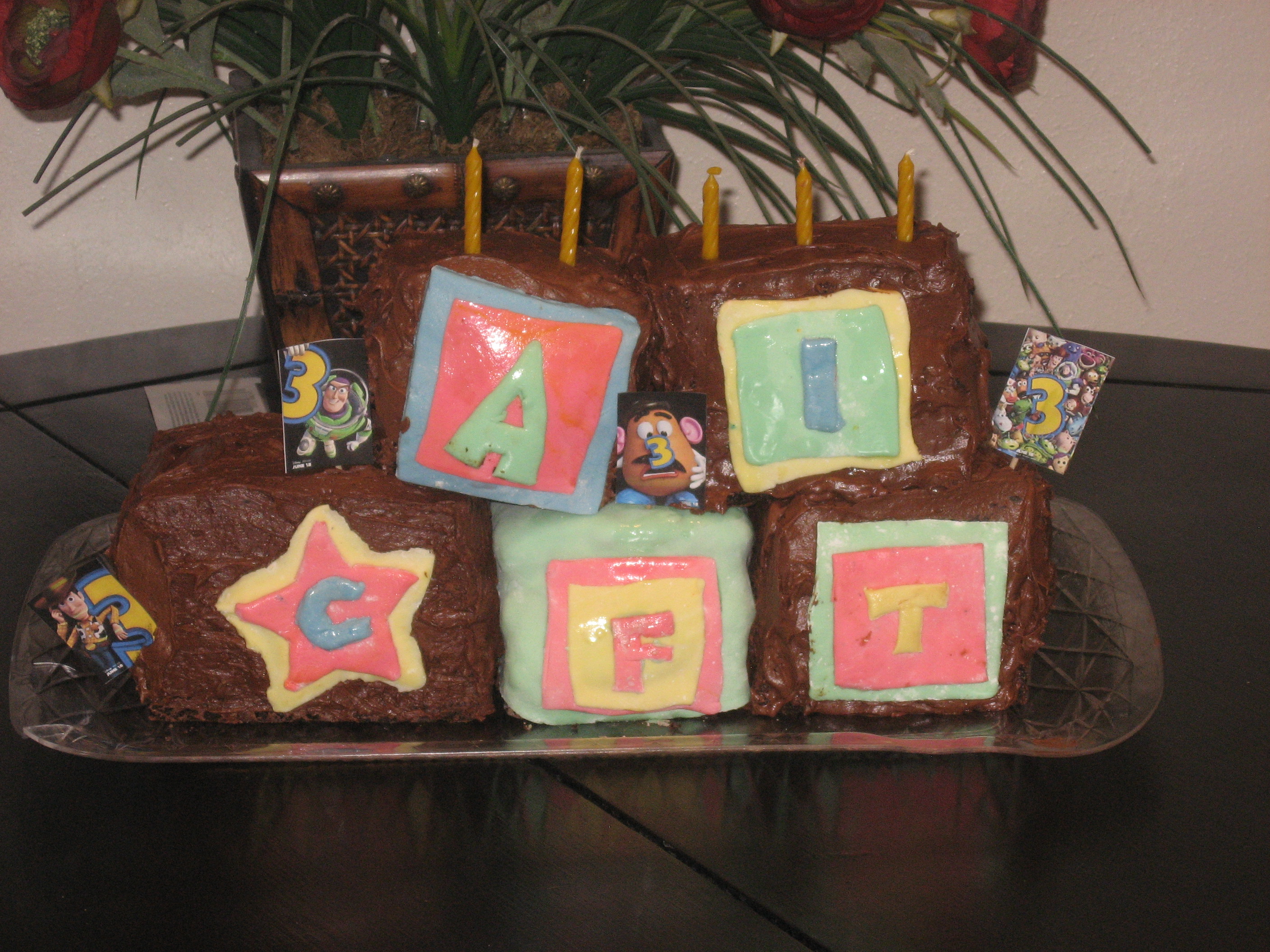 But I don't know who said fondant was simple and easy. It's not. It was simple and easy to make...just time consuming!! No wonder people pay a lot of money for ornate fondue cakes. And the kids ended up picking it off anyways. They thought it was too sweet. But it was fun cutting out all of the shapes. I don't think I did a great job, but I did my best. All that time... 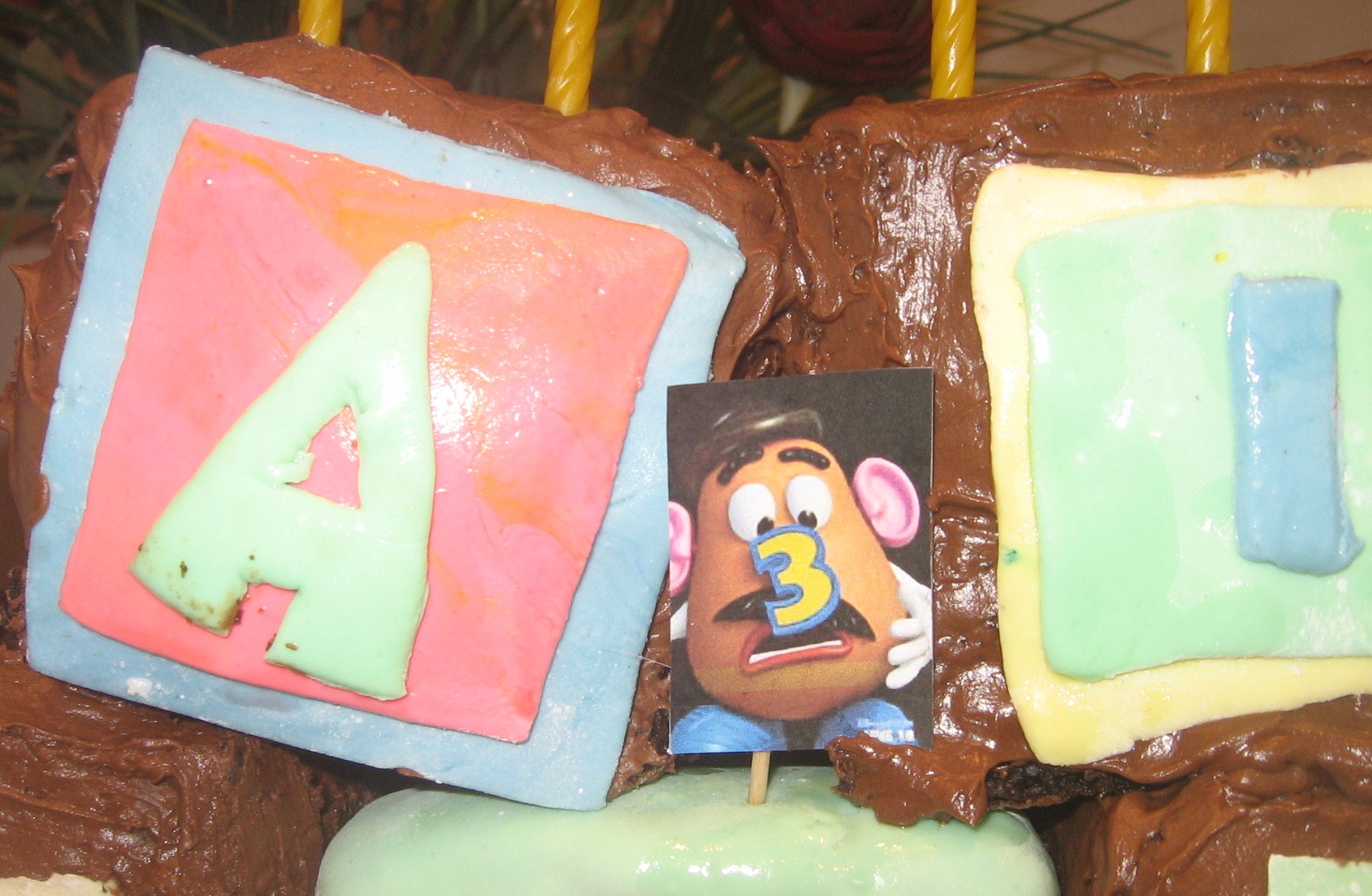 The games were my favorite part, and we tried to stay on a Toy Story theme.

In place of a pinata, our kids love having a balloon stomp. We fill up balloons with tiny candies, toys and trinkets. We also have some "trick balloons" that don't have any treats inside. Everyone participates in stomping balloons and popping them trying to see if they have a treasure inside. Treasures are collected and put in their favor boxes for them to take home later. This one was a Rex's Stomp theme after the dinosaur in Toy Story. Kudos to my little girl for thinking up the name! 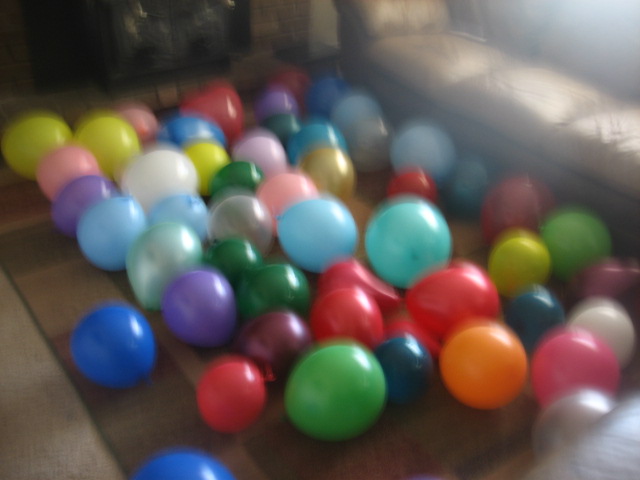 Nerf guns. Boys. Targets. Black light. Our kids had a blast painting the scenes from Toy Story on plywood panels we had laying around from past projects. We used flourescent acrylic paints found at any craft store. Or you can use glow in the dark paints. We had Buzz trying to defeat the evil Zurg. Of course, the crazy aliens were there too.  (See cupcakes above). We also made some paper targets painted in neon paints, darkened the windows with dark curtains and pillows stuffed in the window opening, and swapped the regular light bulb for a black light. Then kids could go in by twos and have fun shooting the targets, aliens and other glow in the dark objects in the room. While some of the kids got a little scared,  most all of them (except one) warmed up and ended up having a blast. This game was definetely inspired by the Disney Astroblaster Ride--my son and husbands' favorite ride at Disneyland.

Instead of the typical horseshoes game, we renamed it. And the kids loved it. Go figure!

I don't think I searched for anything harder than I did a seeded watermelon. Those things were hard to find! The boys had a blast having a watermelon spitting contest. They were given permission to spit! How cool was that?? Actually, I am now the coolest Mom on the block. It was funny that they looked at me like "you're actually giving me permission to spit?" This one was just because it was hot outside. Unfortunately the water balloons lasted a whopping 5 minutes. And the boys spent the rest of the party soaked. They looked so pretty before they were smashed to bits in my grass. 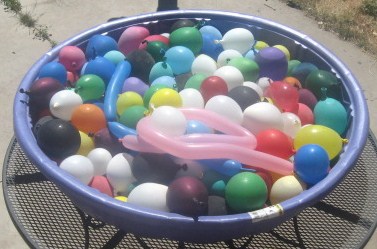