Shredded potatoes come together to make a beautiful latke perfect for the start of Hanukkah or as a simple breakfast or side dish. Latkes just need a few simple ingredients and a few minutes to make!

Latkes have rich European origins as an inexpensive food. They became more known as a Hanukkah treat.

Latkes are typically fried in oil, which is symbolic during Hanukkah as oil symbolizes the miracle of the season. When oil meant for only one day was able to miraculously burn for eight days. The holiday became known as Hanukkah. Latkes are often consumed during the holiday. 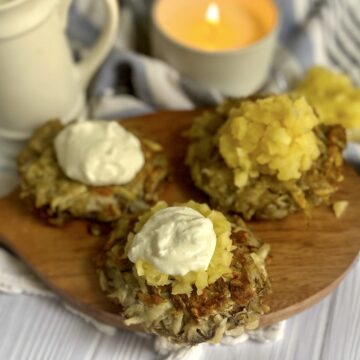