A break for a Mom never lasts long--especially during the summer. A "break" usually entails quickly scrolling through emails and sending emails back, looking at what new gossip is happening on social networks, and browsing Pinterest. I have a certain little boy that sees me on the phone and thinks that I am playing his favorite game--Angry Birds. He will sit by me and give me hug, only to crane his neck to see what I'm looking at.

While sitting by me one afternoon while I scrolled through my emails, he noticed one from Our Best Bites for an ice cream cake with homemade Magic Shell.

Magic Shell is a BIG deal in our house.  The kids rarely ever get to eat it. With ice cream being one of our favorite summer treats, they always ask for it. But I don't buy.

He told me THAT cake was what he wanted for his birthday. No exceptions. Since we were going to be going up to grandma and grandpa's house (over an hour away) making an ice cream cake wasn't going to happen. But I couldn't see why he couldn't still enjoy some carvel crunchies and magic shell.

* If you have NO idea like I did what carvel crunchies are, they are Oreo bits and Magic Shell mixed together and placed in the center layer of an ice cream cake. I never had them growing up, so I had no idea what they were.

He also wanted an Avengers birthday cake. I thought it couldn't be too hard. But most cakes (although beautiful) were above my skill level and required fondant. I've done a few fondant cakes, and my kids hate fondant. So a fondant decorated cake was out too.

I resorted to the internet for Avengers cake toppers, but by the time he chose what cake he wanted, the cake toppers were not going to be here in time for his birthday. I called around to different stores, but none would sell me just the cake topper.

Plan D: Make my own. I'll show you how after the cake. 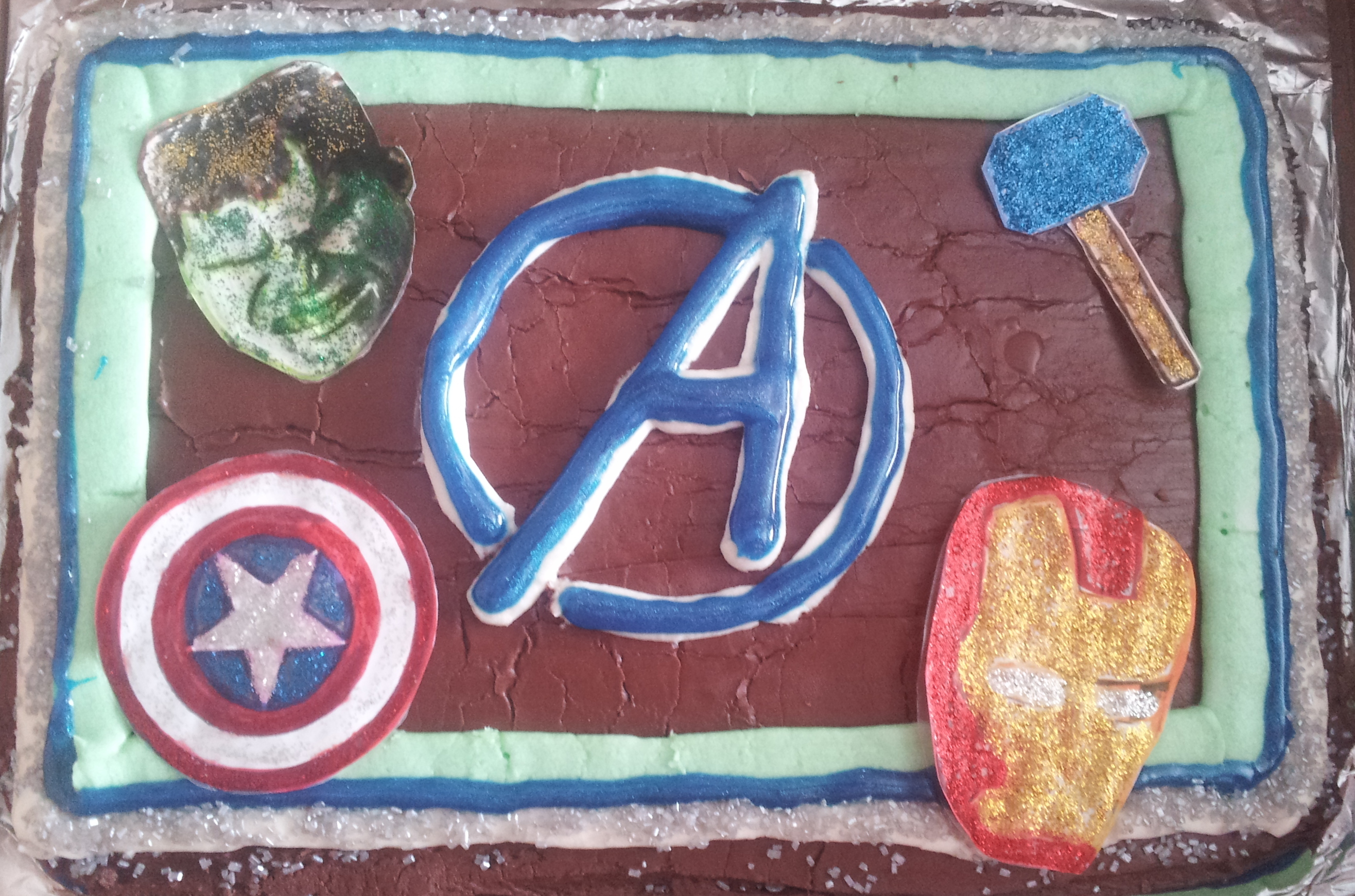 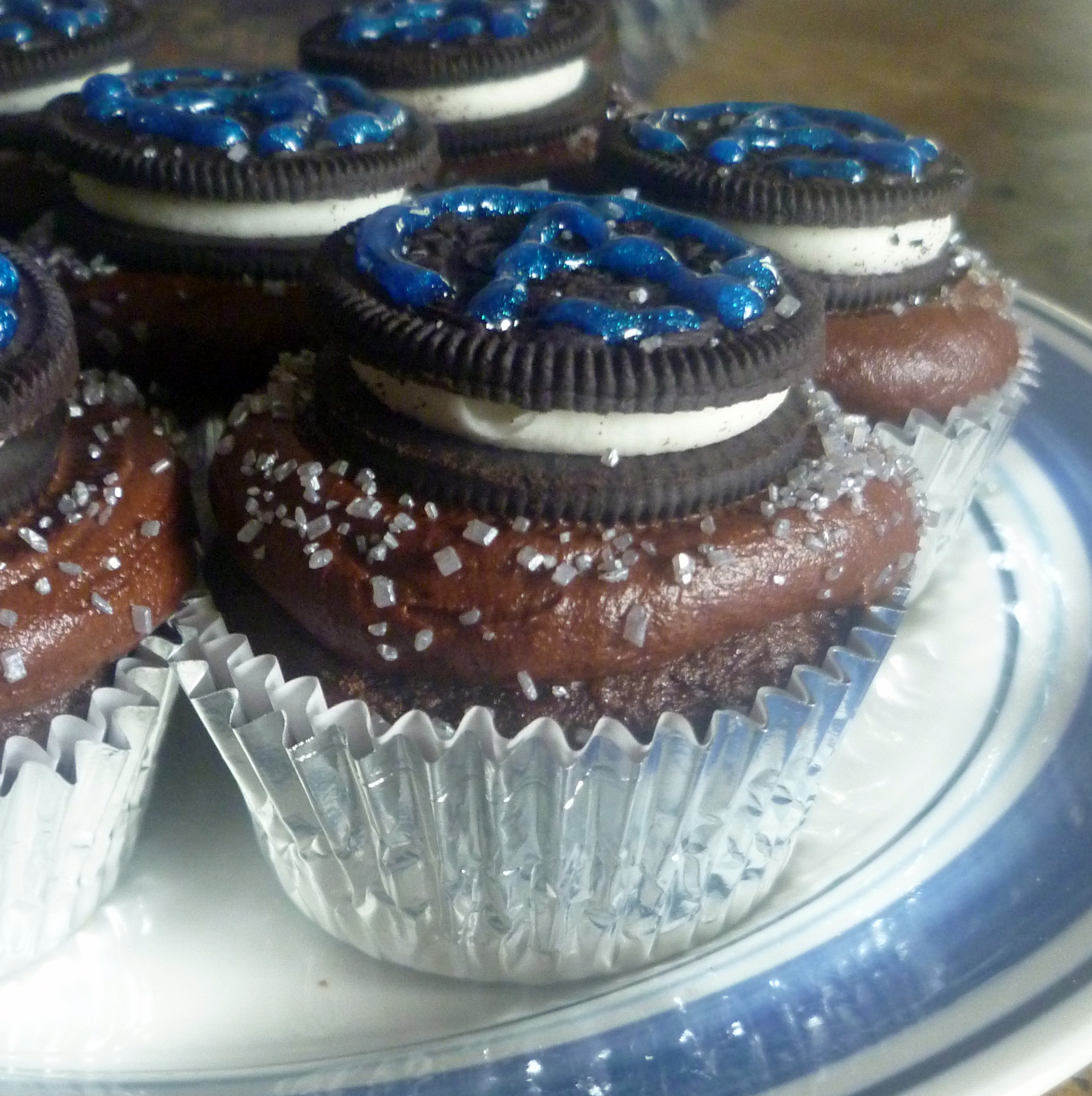 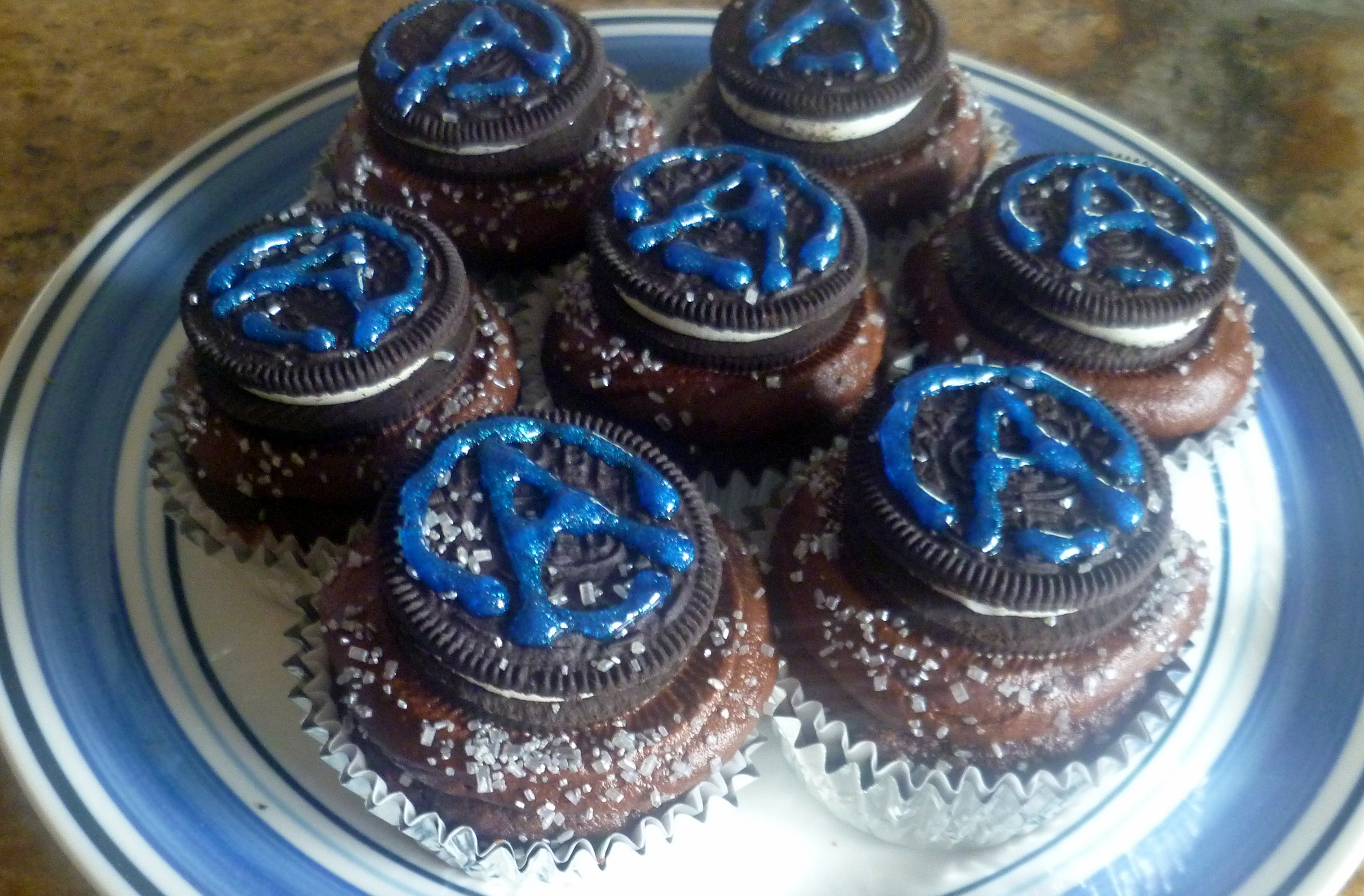 For the cake you will need:

For the cupcakes you will need:

To make the Cake:

2. With a cake cutting wire, slice the cake in half. Spread an even layer of the carvel crunchie mixture over the bottom layer of cake. Top with the top of the cut cake. Frost entire outside of cake with the Hersheys chocolate frosting recipe.

3. Using the tinted buttercream frosting (I used green, blue and white), accent the borders of the cake. Sprinkle the silver sprinkles around the outer edge of the cake.

4. Using the blue sparkle decorators gel, make the "A" for Avengers.  In each of the four corners, place a clip art picture  of one of the Avenger characters. (i did a google search, printed out the pictures, colored them and pasted them on the back of wax paper before placing them on the cake).

2. Frost each cupcake using the Hershey's chocolate frosting recipe. Sprinkle silver sprinkles over the top of each cupcake, then top each cupcake with an Oreo.

3. With the blue sparkle decorators gel, make an "A" for Avengers.

Toy Story 3 Cake (My first and ONLY attempt at fondant)